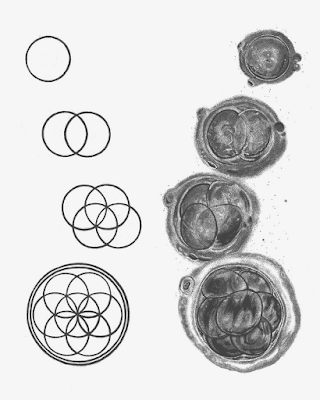 This post is short and sweet; I will leave it to my readers to see the similarity between the symbols on the left and the stages of growth on the right. All that needs to be said is that the basic symbol of the 'seed' and of 'growth' is the Hagal-Rune which forms the central core of the seven-circle symbol at the bottom.

My point in showing this is also simple, for it proves beyond doubt that the ancients knew and used the runes as the Secrets of Nature and not merely as an alphabet for writing with. They were indeed Magical Symbols because they worked with the Laws of Nature and harmonised with Nature at all levels. Knowing the Secrets of Nature meant being able to use them in a magical way; this is the basis of magic.