This post is going to outline how to make runic wands, runes, and other ritual regalia used within the Woden Folk-Religion. Some of the stuff shown here is used by Woden's Folk in their rituals. It is important to try to make the stuff yourself, using the correct tools and above all hallowing each object ritually to 'charge' it with Vital Energy. Firstly, I am going to give some advice on how to make  ritual objects yourself -
1. Use hand-tools that are solely for this work.
2. Never use any form of electric tools.
3. For runes, runic wands etc. I have used Rowan Wood, since 'rowan' is 'rune' and since Tacitus tells us that some Germanic Tribes used 'fruit-bearing trees' as wood for their oracle-staves this fits with this perfectly. But there is no need to become dogmatic as any wood that suits your purpose can be used.
4. Red Ochre is used to 'redden' the runes, and I have always used a 'prick' of my own blood to 'charge' the runes with my own Life-Force. It is essential to 'charge' them for your own use.
5. Linseed Oil is used to protect the wood after finishing, and beeswax polish to finish off the product. Linseed oil is made from flax which is sacred to the goddess Freya.
Details of how some of these ritual objects are made can be found on the Woden's Folk website, but here I am going to outline some more details that may be relevant and helpful to your work. 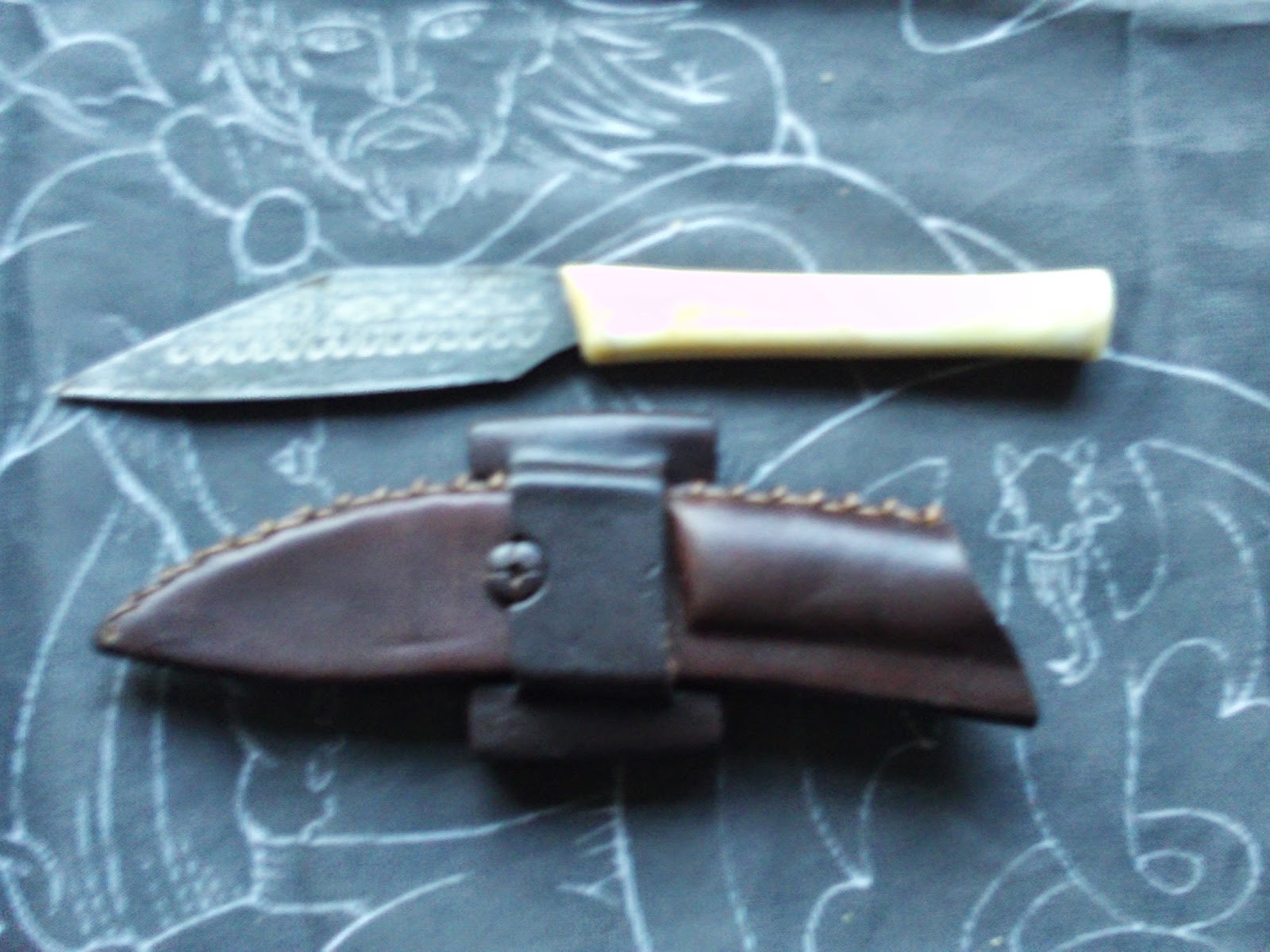 One of the tools that you will need is a good sharp knife that is uses solely for this work; I use the above knife which is sharp and used to finish the product, and to 'sharpen' the runic staves which are burnt in rather than carved (saves less blood-spilling, but if you are handy at carving such small and delicate stuff carving would be ideal). I have two knives, the other one being similar to this one but slightly smaller.
24-Rune Futhark - 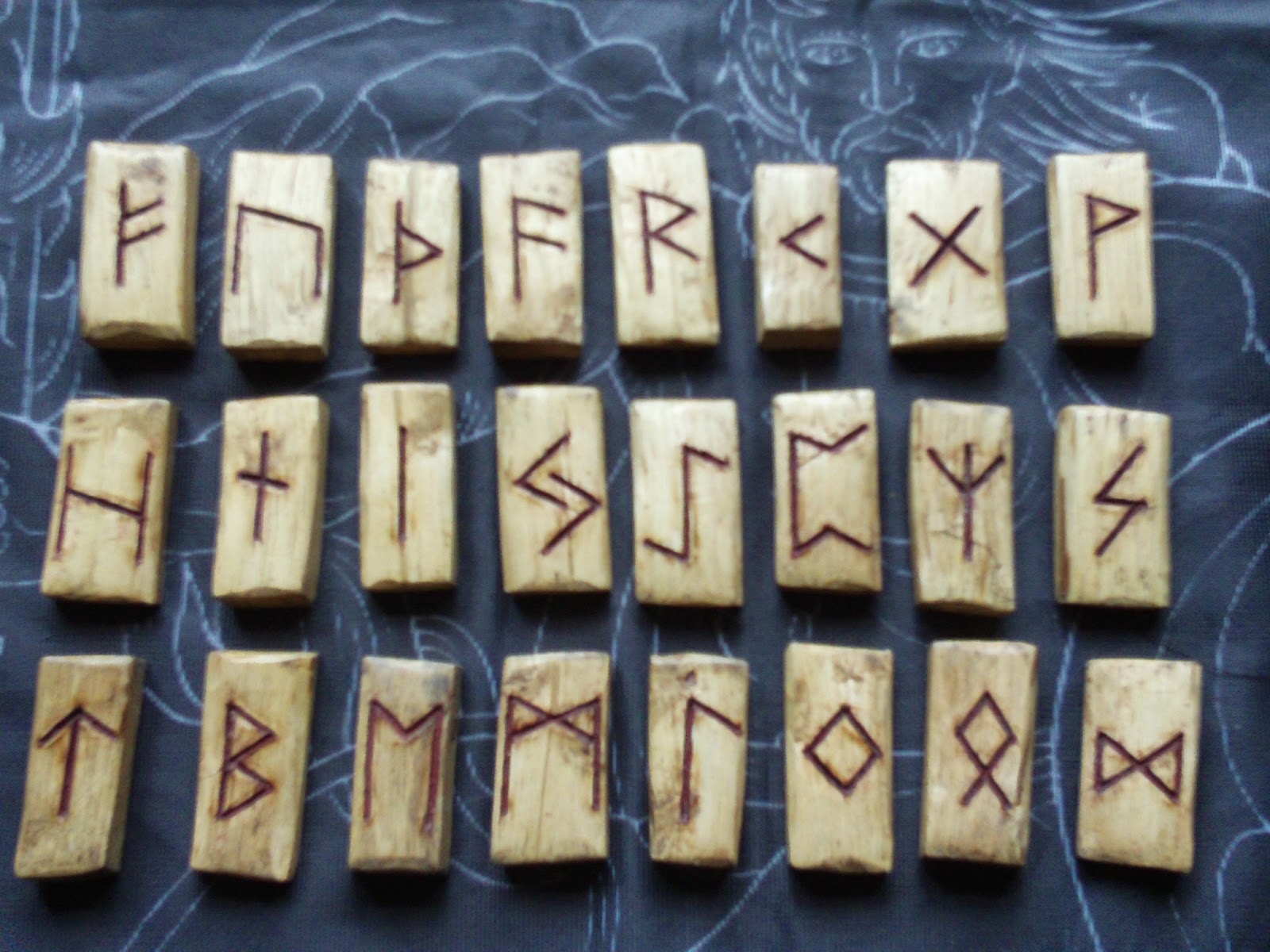 These rune-staves are about 1 1/2 inches high, 3/4 inch wide and about 1/4 inch thick and have been burnt, carved to finish, stained with Red Ochre/Blood and protected with linseed oil and beeswax. This is the first rune-set that I had attempted and came out very well. The edges have been chamfered using the knife which gives them a 'rough' finish. Note that I have not tried to make each rune uniform and the same dimensions because this makes them look a bit more 'authentic' looking.
24-Rune Futhark - 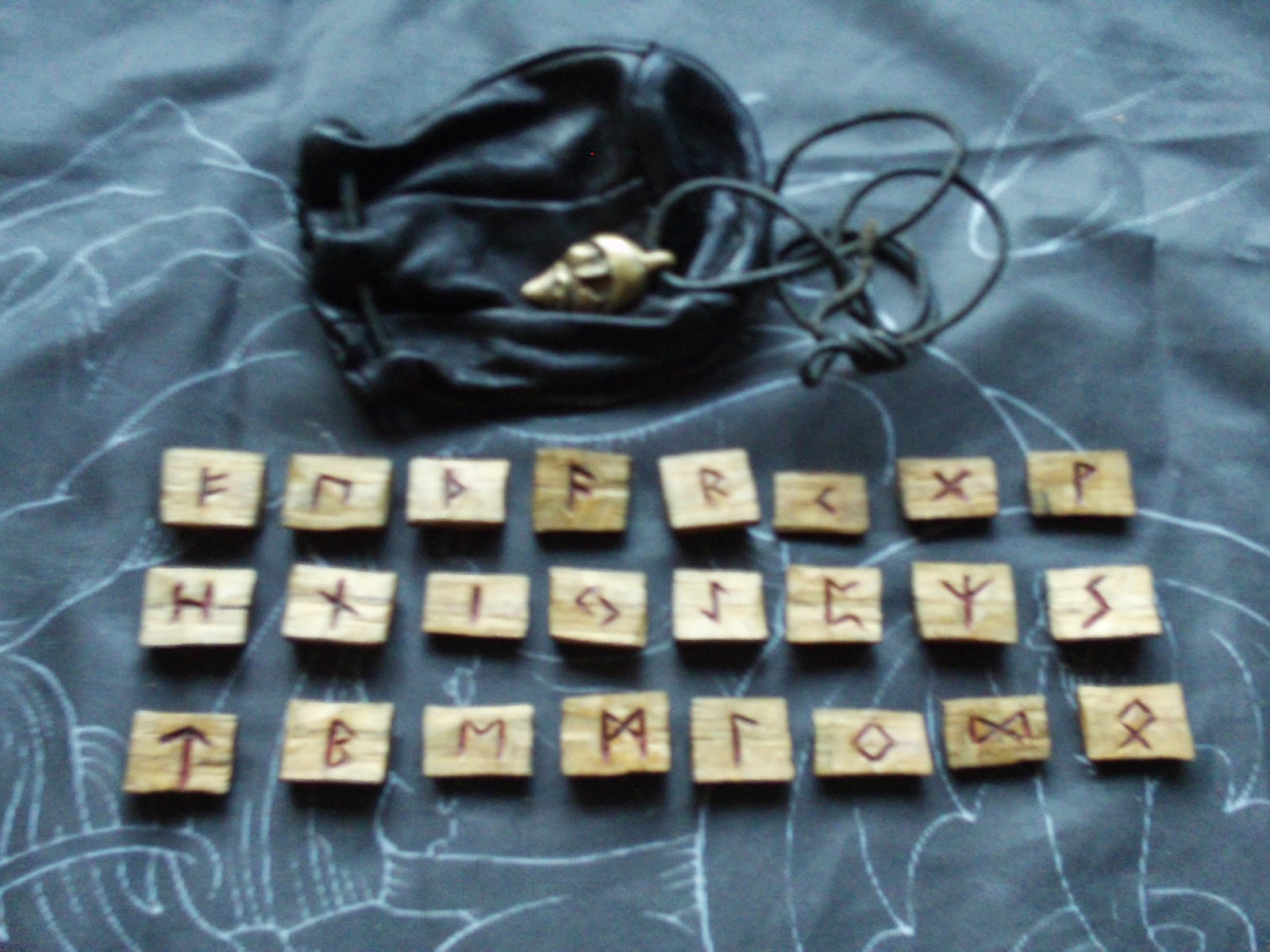 This set is very much smaller than the first set, being about 3/4 inch long, 1/2 inch high and 3/8 inch thick, this time cut from round pieces of rowan wood, split down the middle, leaving one smooth side and one rounded side, the runes being carved on the smooth side, of course. Note the small leather pouch that they are kept in (get these from any leather store or re-enactment fair) and the god-head on the leather closure-thong.
33-Rune Futhork - 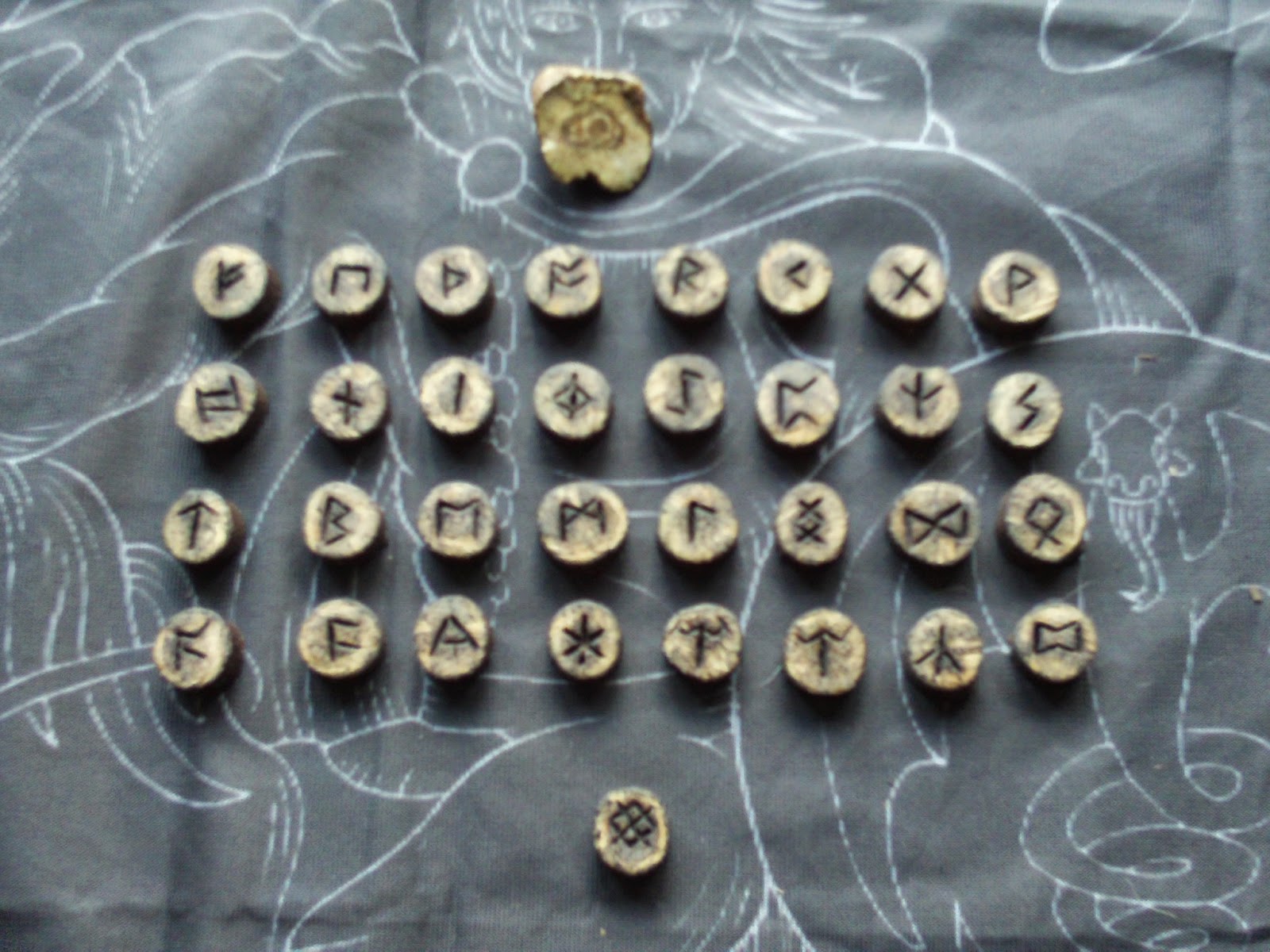 This is an entirely different version of a rune-set, being made up of small pieces of rowan wood cut across the section, leaving on the bark if you wish, and then having the runes burnt on the cross-section. Being only about 1/2 across or less these are a bit harder to get the runes onto, but easier to cut and make than the larger ones. (The stone above it has an 'eye' naturally within itself, and thus here represents the Eye of Woden.
33-Rune Futhork - 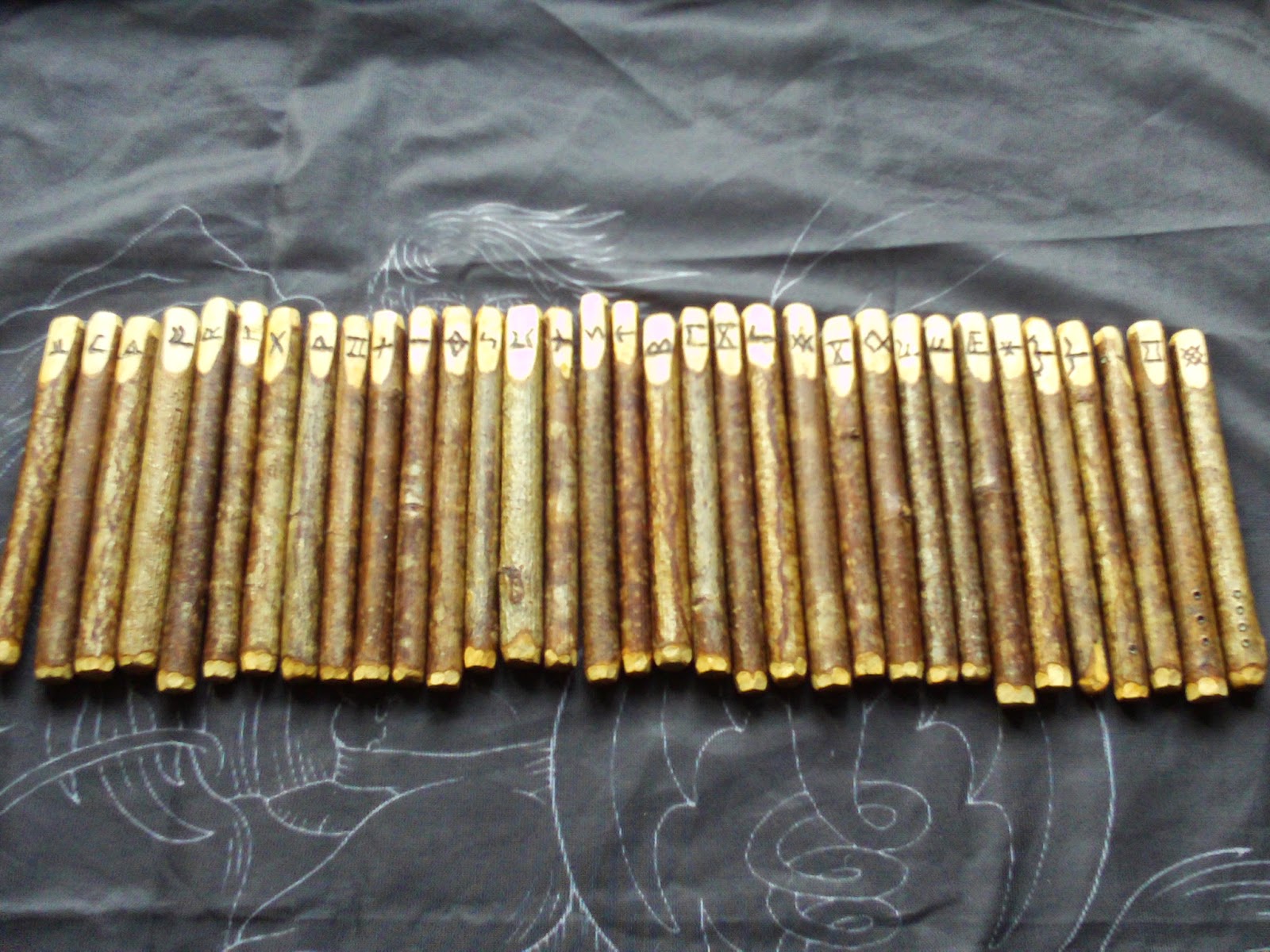 Again we have a different type of rune-stave, in this case 33 staves cut in lengths of about 4 inches each with the bark left on. Each end is shaved smooth and the runes burnt-cut into this section. These can be used for an entirely different form of divination, in which the staves are thrown onto a cloth and the stave-shapes as well as the runes themselves taken into account in a reading. These rune-staves were made from hazel rather than rowan, hazel being a sacred wood for water-divining.
Nine Glory-Twigs - 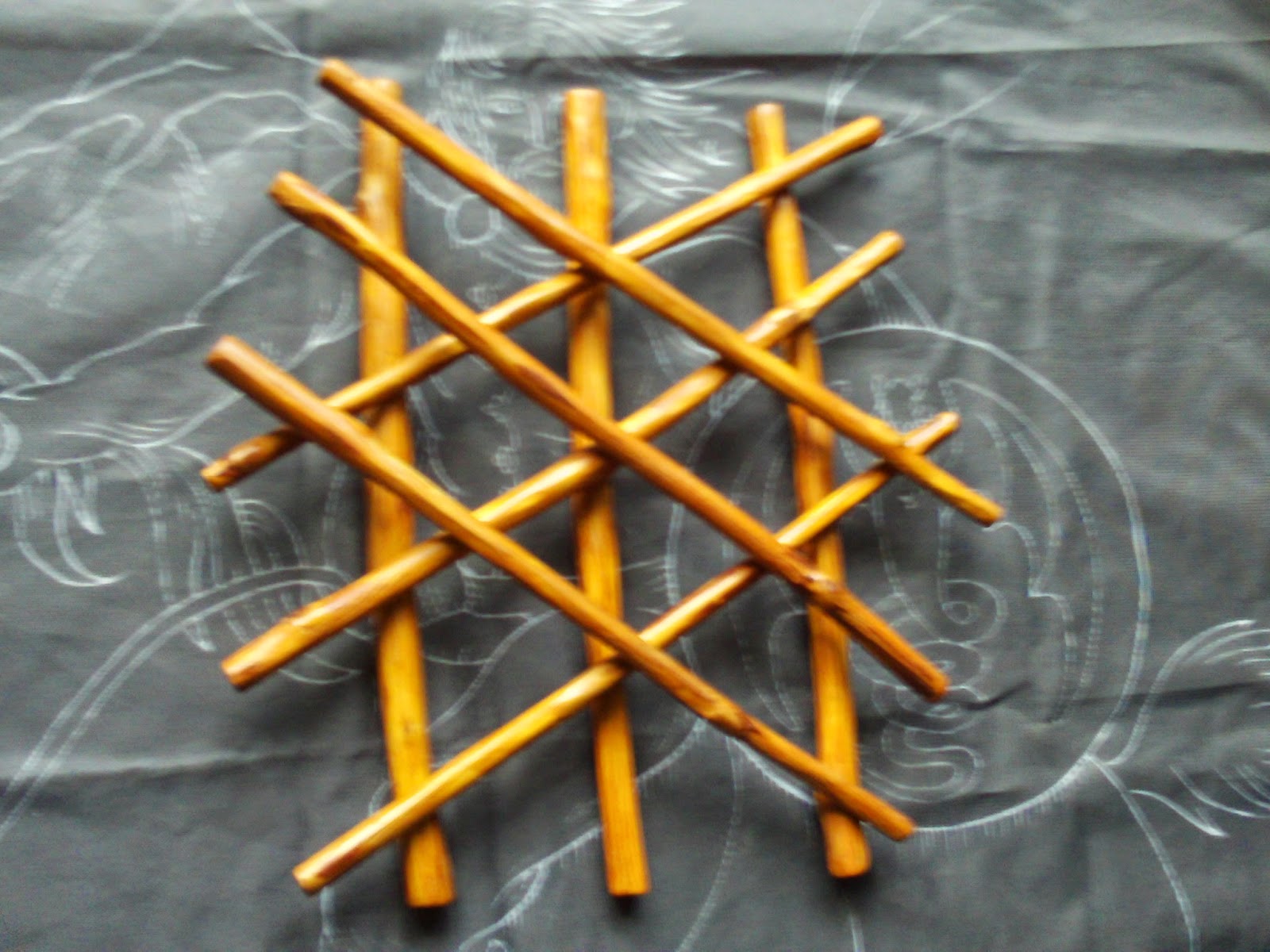 From this simple pattern all 33 of the runes of the Ar-Kan Rune-Lag can be found. The Glory-Twigs are made from rowan wood cut 9 inches long (the 'Sacred 9') and are carefully placed in this position to make up the 'Mother Rune'. It should be noted that the 33 runes are all found within this shape, but there are also an infinite number of shapes contained within it, so the runic staves are almost endless. The 33 rune-row is the longest that we know of, but there are more recorded runes that are not in any rune-row.
33-Rune Wand - 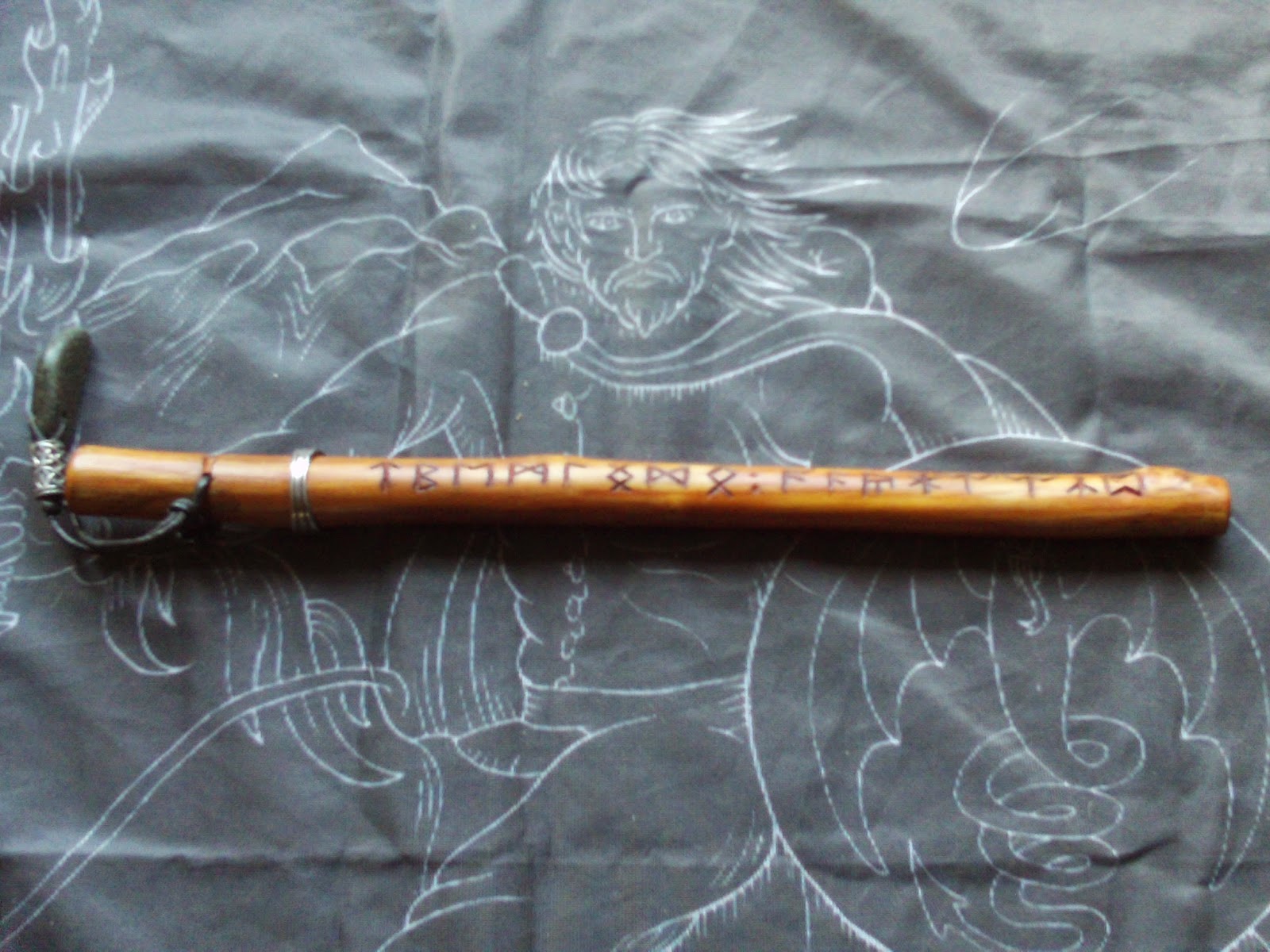 This Runic Wand has the 33-runes burnt-cut into the rowan stave along two edges, made up of four sections of eight (32) with the Gar-Rune burnt-cut into one end as the Sacred Centre or Cosmic Axis. A silver Fylfot-Ring has been pushed onto the stave to finish, and a piece of 'bluestone' hung from one end. The wand and nine glory-twigs are shown below - These two provide a unique Ar-Kan Rune-Lag teaching method based upon the ancient use of passing knowledge down from one generation to the next by word of mouth. These can be used together to do this easily, and will become far more used in the future role of Woden's Folk as a Teaching Order. We have to pass this Runic Wisdom onto others so that it is kept for future generations to know and use.
33-Rune Spiral-Stave - 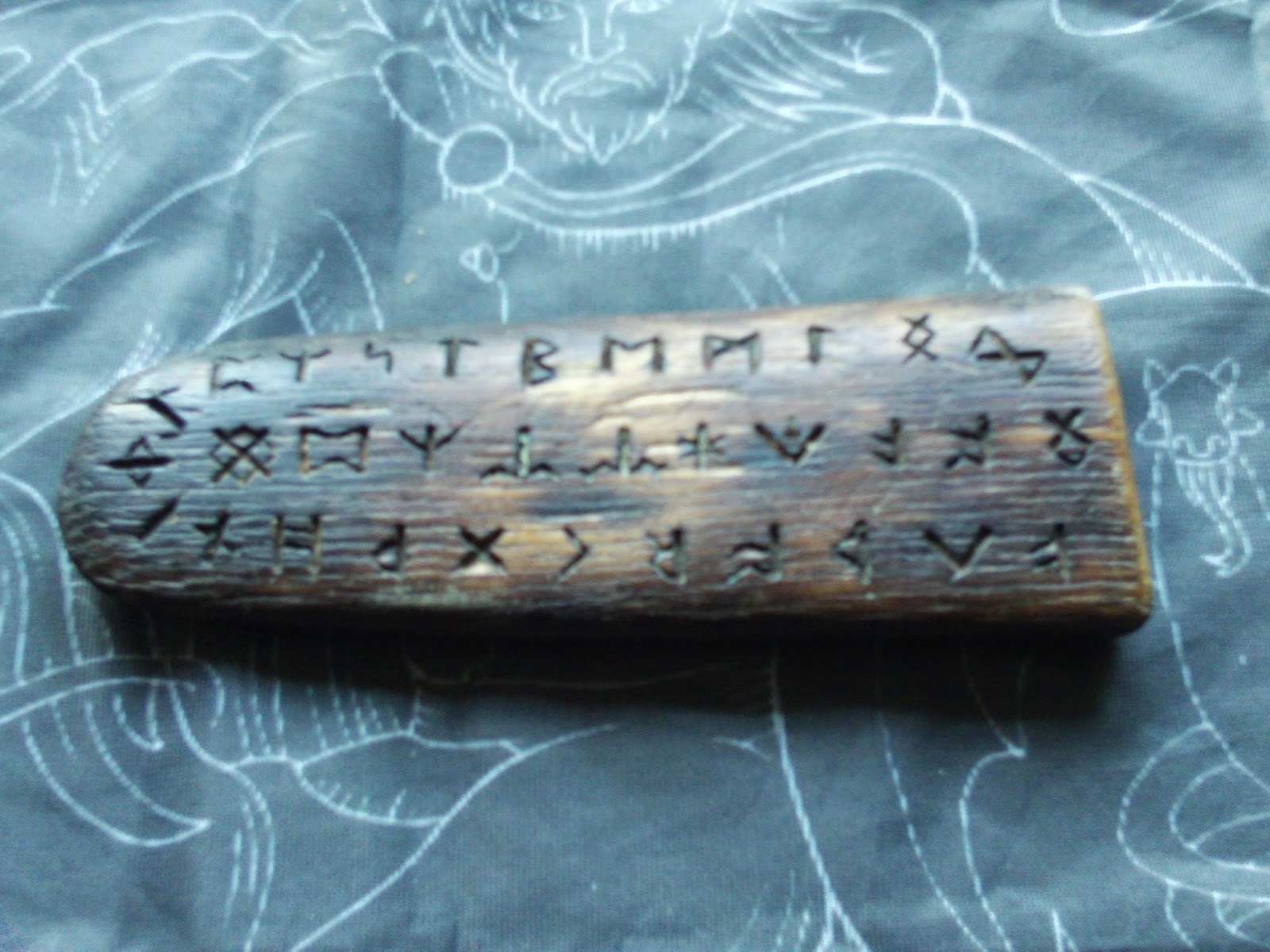 This is a most interesting rune-stave which has the 33-runes cut into a 'spiral' form on a piece of wood taken from an oak-barrel that held whisky. Indeed, this is really taken from sacred wood since the oak-barrel is used as part of an ancient Viking Ritual held in a small village in the Scottish Highlands - a ceremony called the Burning of the Clavvie. This is just one small piece, and I made much more of these, including a runic fylfot-staff made from a whole length of the curved barrel; this can be used as a Ritual Fire-Bow to create the Need-Fire.
88 Rebirth Mandala - The meaning of this will be known to those who have read my book and will not be revealed here. This was another piece from the 'clavvie' wood and has been burnt-carved and stained-blooded to give it 'Life-Force'. There is another version shown below - 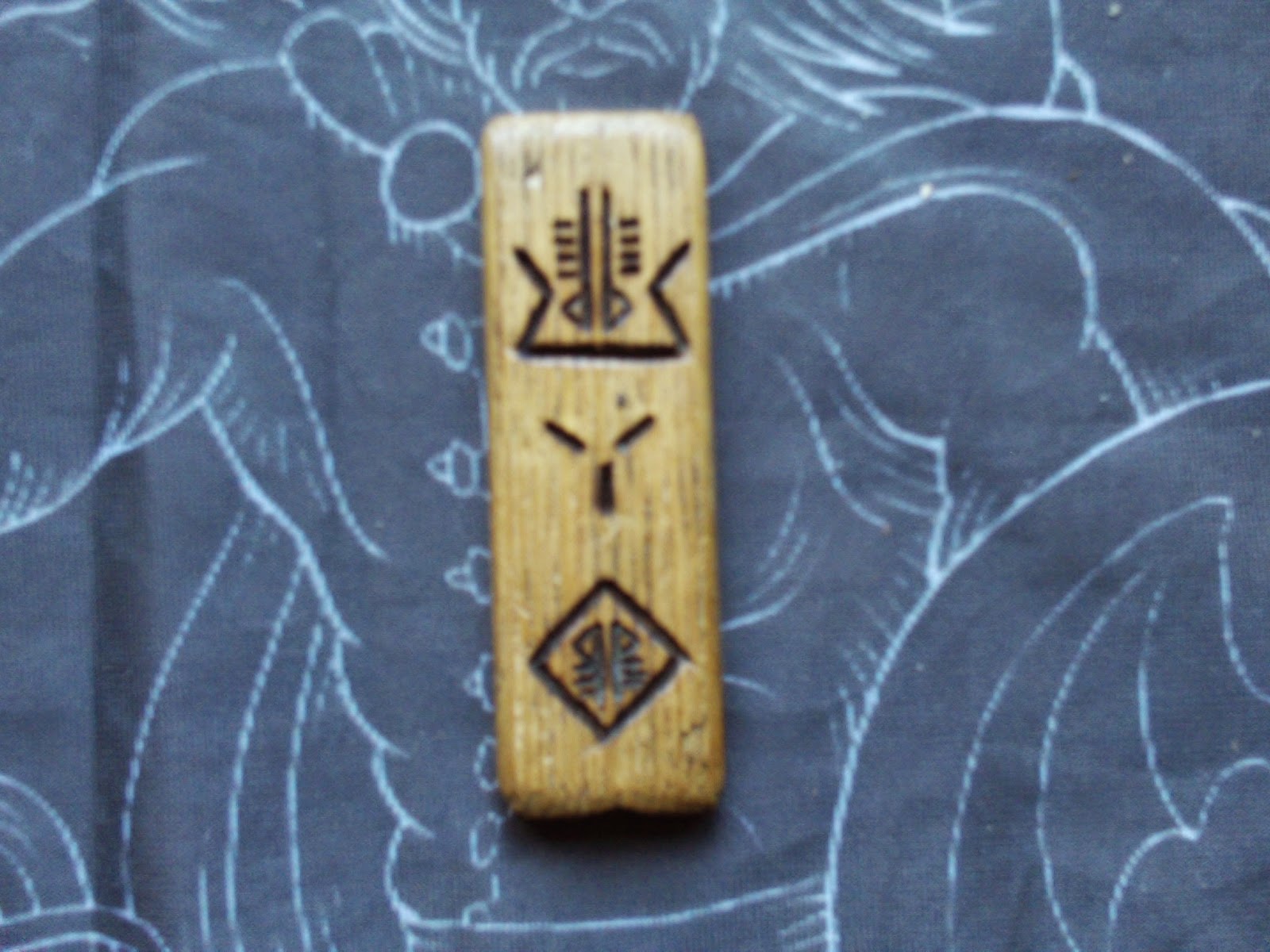 Below is shown part of the 88-Mandala which is another form of this but one in which a total mandala is made up from small rowan-staves, a process which itself needs full concentration and thus 'powers' the mandala as it is made up. Space allows only the top section to be shown - 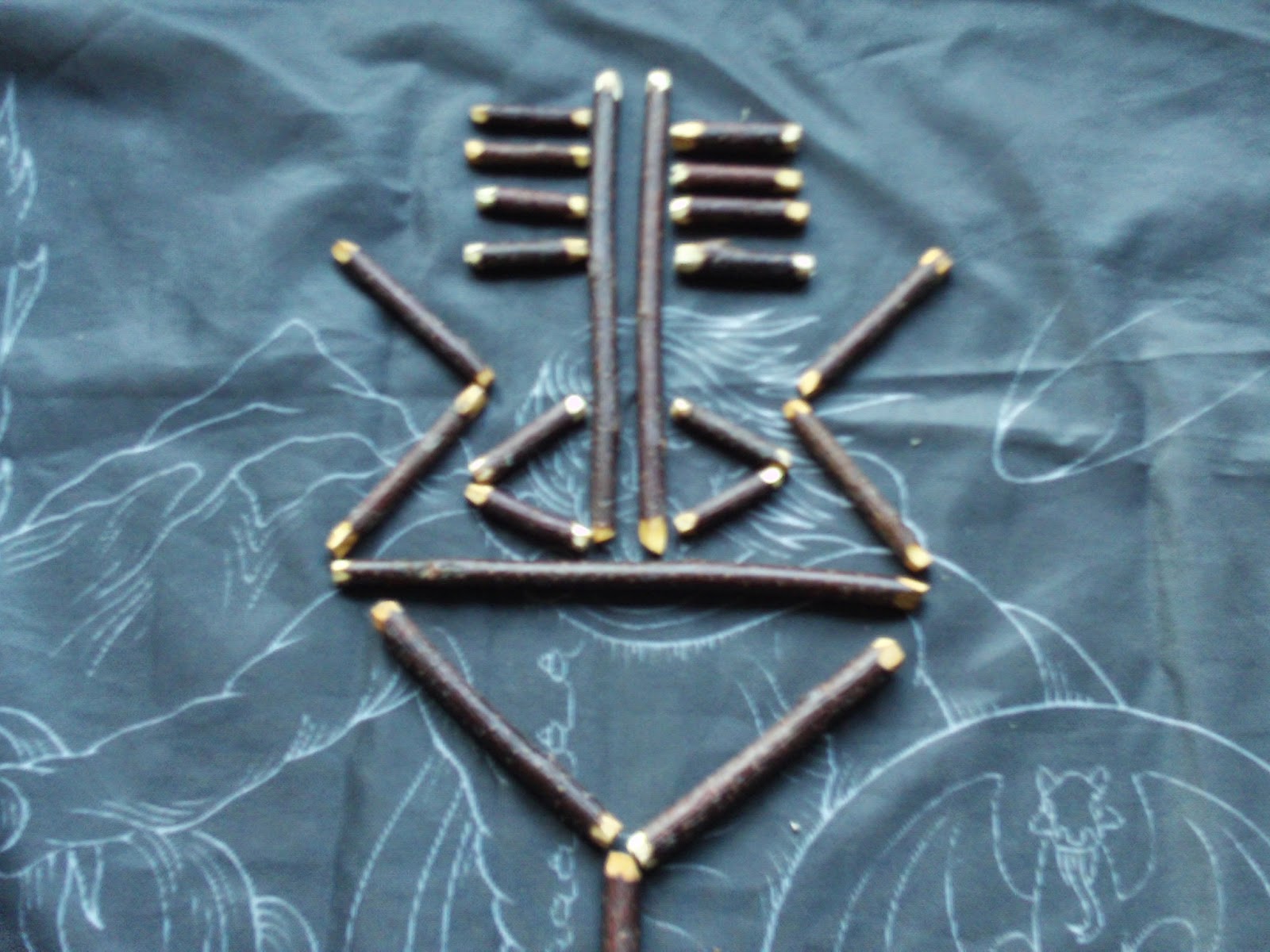 The photo below shows the rowan-staves, the very small staves being contained in the two film-cases - 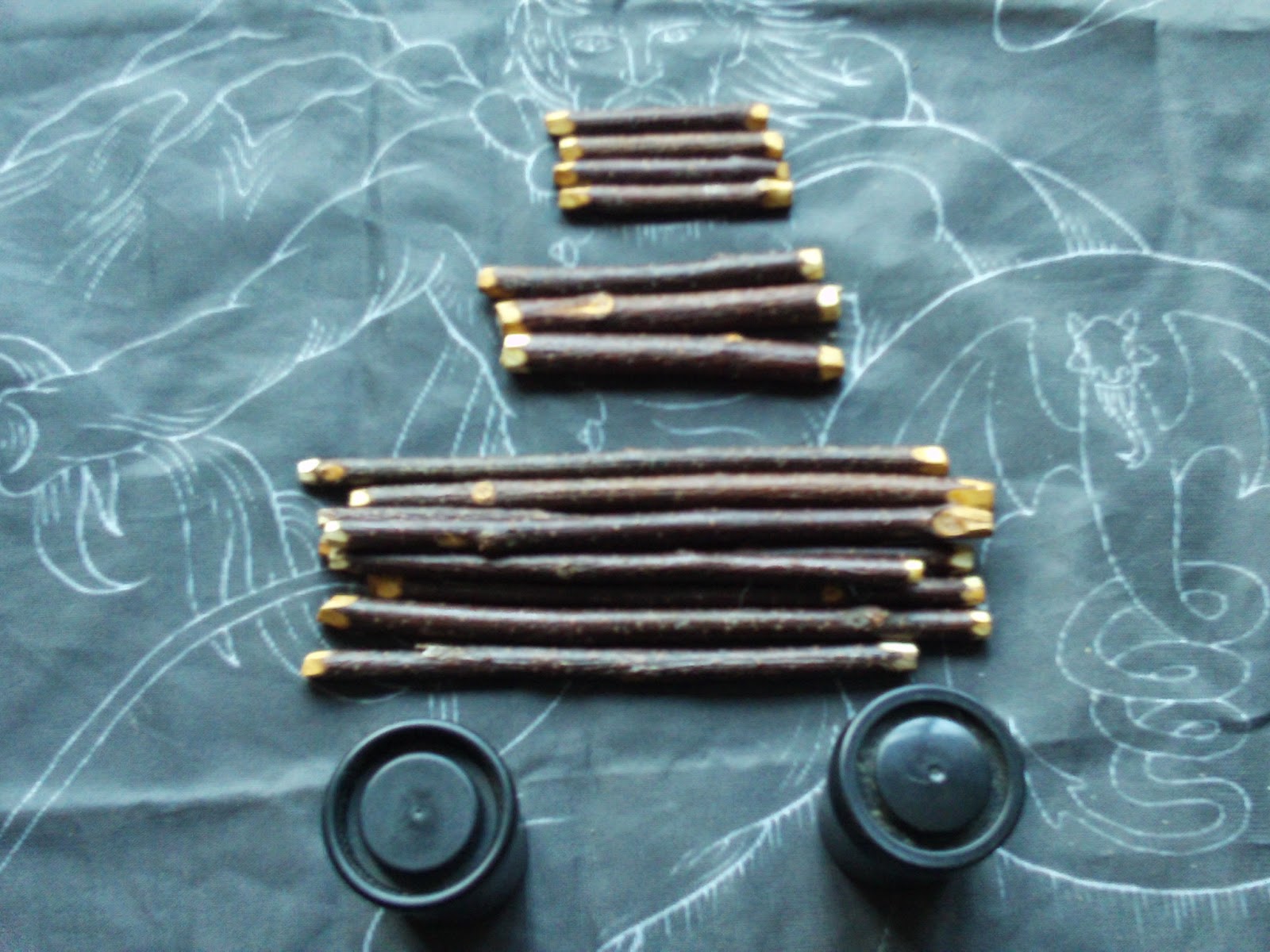 This Runic Mandala shows that runes are not used solely for divination, but are used for magical invocation and for causing change through the power of the Will. Making up an runic mandala is in itself an act of magic, having to use full concentration and the use of the Will. It is the Triumph of the Will that overcomes all adversity, no matter how powerful that adversity is. Will is an aspect of Woden - indeed, his brother. ﻿
24-Rune Wand - 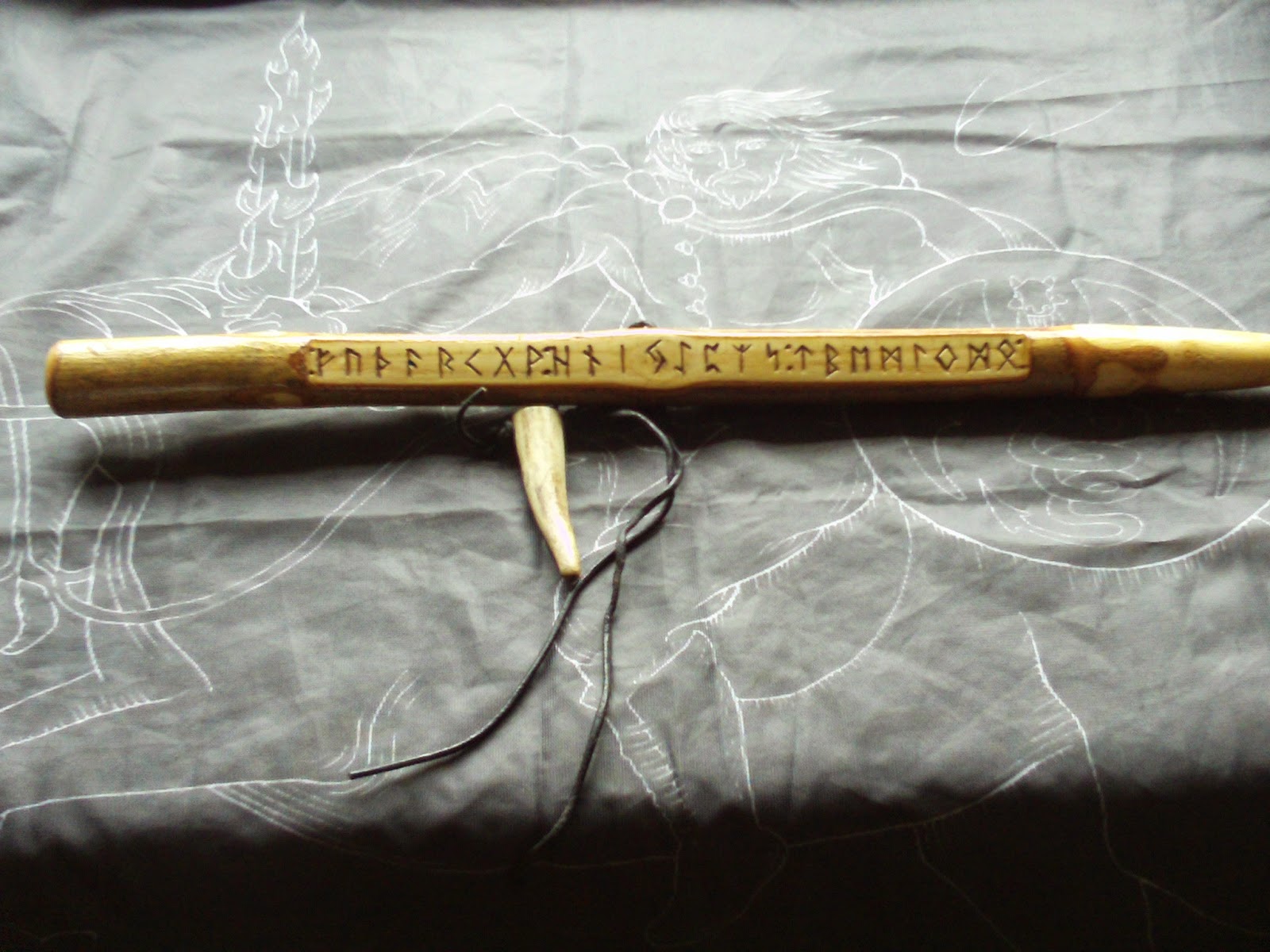 This one is made from Ash-Wood and was made by a very dear Folk-Comrade of mine - Hraefn - who died a few years ago and left his regalia to me to keep and to pass on for future generations. The stave uses the 24 Rune Futhark and has been brilliantly carved with the runes. Note how the bark has been left on which helps to give 'feeling' to the wand.
18-Rune Armanen Set & Runic Wand - 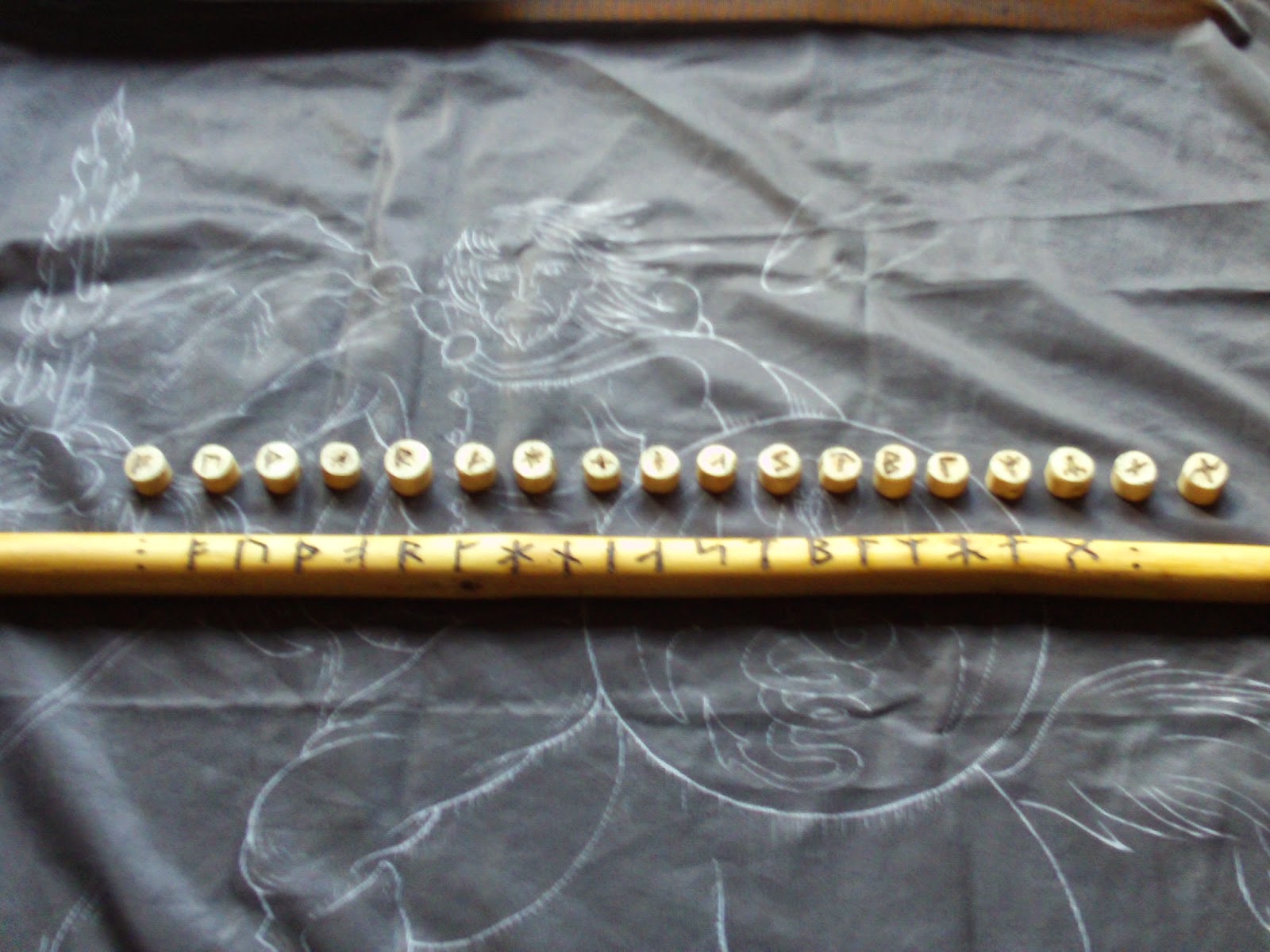 This runic-wand and rune-set I made myself and uses the 18-rune Armanen System of Guido von List and other German Rune-Magicians. The wood is indeed sacred since it is from an ash-tree growing on the grave of Karl Maria Wiligut in Germany.
Runic Ancestral Stave - 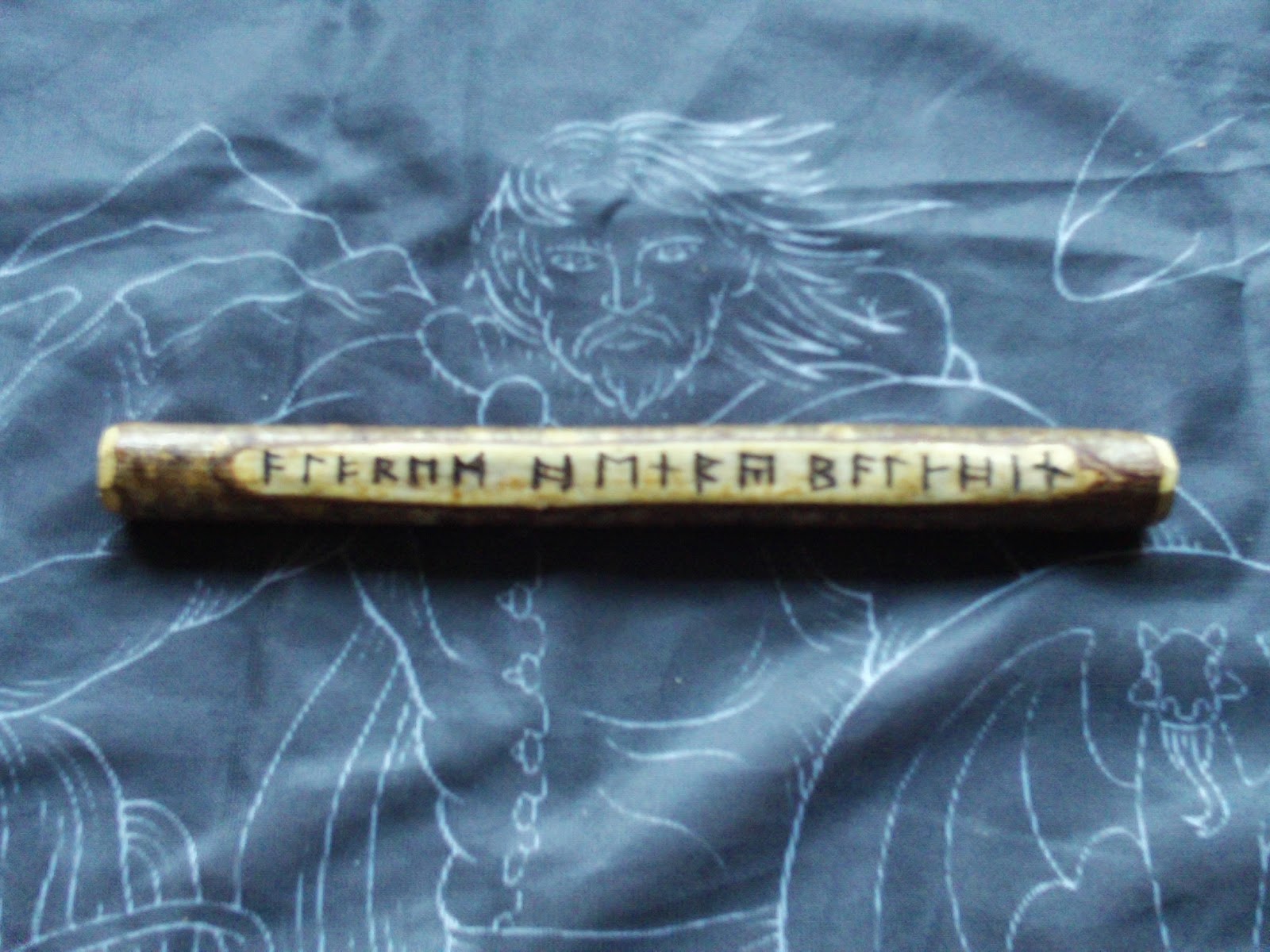 The words on this stave read - ALFRED HENRY BALCHIN - the name of my maternal grandfather who died when I was in my youth and who was very close to me. I can remember having a bad dream in which I 'left my body' flying through the air until I was hovering over a grave - the grave of my grandfather. A few days later he died! This stave was done a few years ago after he made contact through a dream of a close relative who did not even know who he was, but advised me of the dream. I still have an old mantlepiece clock that belonged to him and which stopped - and has never gone again - on the exact day of his funeral. My grandfather was a coachbuilder, this being the job of a skilled carpenter in those days, and I remember him making all his own furniture which is a skill not many possess in today's regimented standardised mass-produced world. 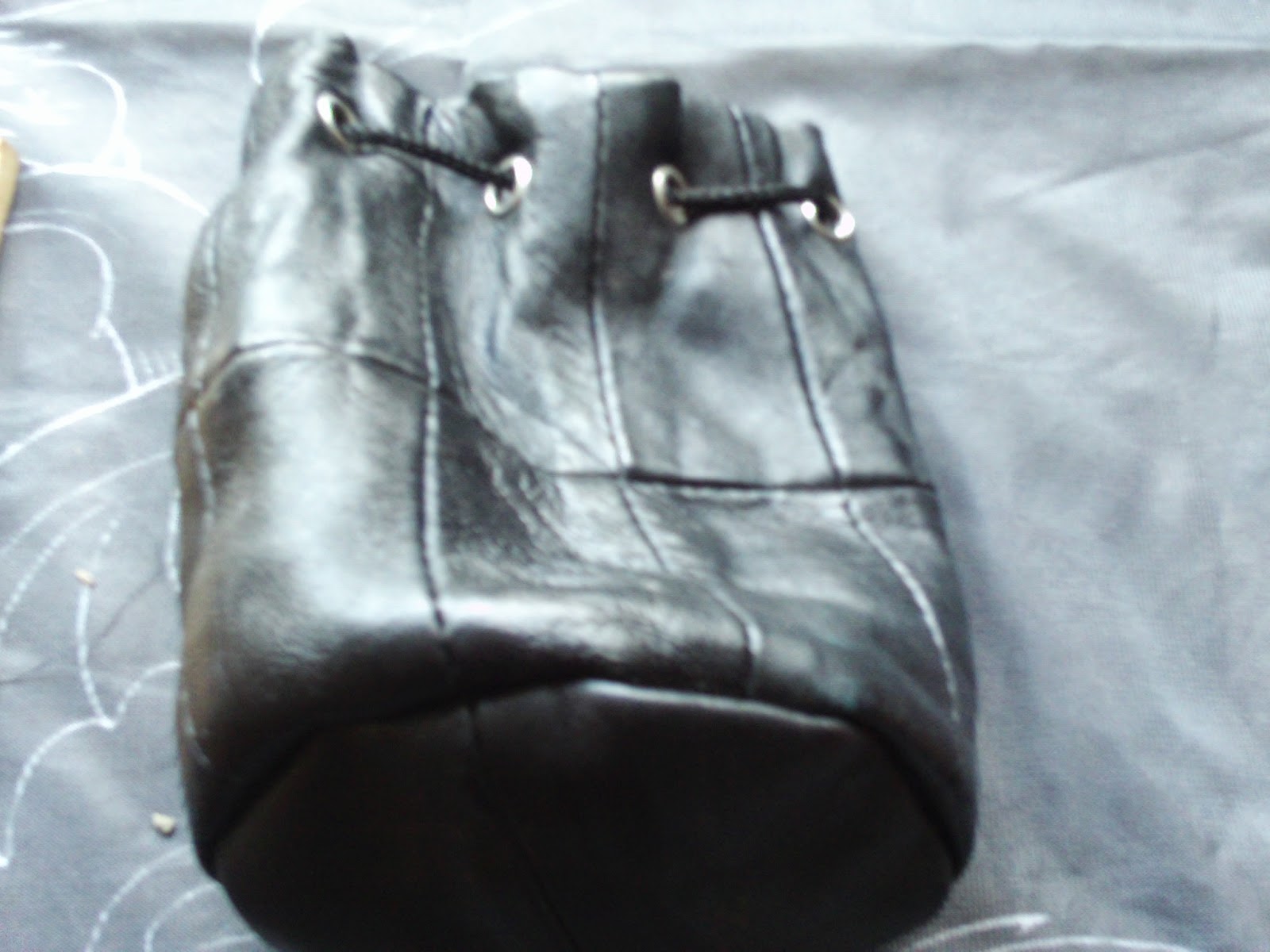 This is a leather bag used to hold rune-sets or rune-staves, and can be used for any small pieces of regalia. One of these makes them look neat and tidy and can also be worn around the neck or tied to a belt around the waist.
﻿