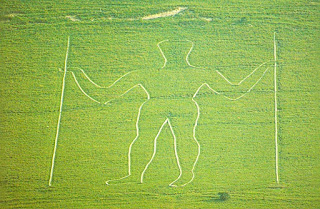 We have established before how the Long Man of Wilmington is the Germanic God known as Waendal, who is an aspect of Woden as the April Fool. This is also the chakravartin or 'Wheel-Turner' in the role of Mundilfore who is the God of Cyclic Time. The figure is shaped like the Ear-Rune and the Cweorth-Rune and holds the attributes of these two runes (which occur only in the Anglo-Frisian Runes).

Waendal (as Mundilfore) turns the Fire-Whisk in order to whisk the worlds into creation, and the Cweorth-Rune is the Fire-Whisk. This is very interesting in that I have linked this rune to the Last Avatar who wields a Flaming Sword. The comment upon this being a play-on-words for sweorth ('sword') is important since the rune represents the Flaming-Sword. There are two distinct meanings here -

The name Waendal also gives us 'vandal' and this god-form is most likely linked to the famous Germanic Tribe known as the Vandals. The royal line of the Vandals was known as the Hasdingas or Asdingas, and by some 'coincidence' some 10-12 miles from the Long Man of Wilmington is the town of Hastings. 'Waendal' stems from the Root *wend- which means 'to wander', but originally stems from 'to twist', 'to turn' or 'to wind'. The figure is thus The Wanderer which is a title given to Woden; however, we find a title of Hama-Heindall in the form of Vindler which seems to stem from vindill  which means 'to twist', 'to turn', 'to wind'. In view of the fact that Hama-Heimdall is the son of Mundilfore this is not surprising.  Another name for Hama-Heimdall is Stigandi which means 'The Traveller'. We can see now a close link between Woden and Hama (or Wudga and Hama).

Mundilfore is the Turner of the Cosmic Mill as his 'son' is the Turner of the World Mill, the roles being the same at different levels. The name 'Mundil-fore' stems from mondull which is a 'mill-handle'; the suffix fore means 'to move', thus Mover of the Mill-handle. We can find some interesting links if we look to the original roots of the words used here -

These roots give us the Pramantha which is the 'Swastika Fire Twirl' and Prometheus who brings down the Need-Fire from the Gods to give to mankind, and suffers for doing to, yet is a champion of Man. Hama-Heimdall is the God of Creative Fire and he is the god associated with the Need-Fire. Sceaf-Ing is a similar archetype to Hama, and he too brings the Need-Fire to mankind in the time of their direst need. This suggests that the turning of the Mill-Wheel is in a motion of forwards-backwards, like the Fire-Bow does to the upright shaft, and also like the 'Churning of the Mill' in Vedic Lore. (This suggests that the Earth turns one way on its axis for a period of time, and then reverses its movement backwards, a movement suggested by the Widdershins Swastika (*) - 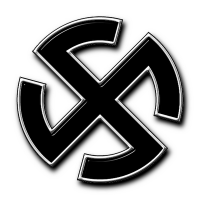 The reversal of the Holy Fylfot into the Swastika of the Return suggests that the Aryan Seers knew well that the Earth was in the process of a major change, indeed a coming catastrophic change, in which the rotation would reverse. It is interesting to note that the rotation of the Earth's axis is the opposite to that of its 'sister-planet', Venus. Maybe this tells us that in the past the rotation was the same, in harmony, and that this will be so again in the Golden Age.

(*) The term 'widdershins' is usually sees an 'anti-sunwise' but its true meaning is from 'widder' which means 'to return'. Thus the 'Swastika of the Return'. This way is also related to the 'Left-Hand Path'.

In one sense Waendal is the God of the Sacred Centre, Mundilfore, whose son Hama is sent by the Gods to create the Divine Order of Caste or Race. This is why an 'avatar' is said to come from the Sacred Centre (Shambhalla in the case of Kalki Avatar). The God-Force is prepared by the Gods and then given a potion of 'forgetfulness' before incarnating into the flesh on Earth. The Cweorth-Rune, being that of the Fire-Eagle (Phoenix) symbolises the 'resurrection' of the demi-god into the flesh.