The Fool's Foot & The Hidden Rune

In a post about the Merseburg Charm I mentioned that the Fylfot means 'Fol's Foot' and also, as a play-on-words, 'Fool's Foot'. It struck me today that taking the Old English word for 'king' - cyning - which is pronounced 'cooning' the Fylfot should be pronounced 'Fool-Fot', hence 'Fool's Foot'. The meaning 'Fol's Foot' stands since this concerns Baeldaeg's horse, Fol being an alternative name for the Sun-God. 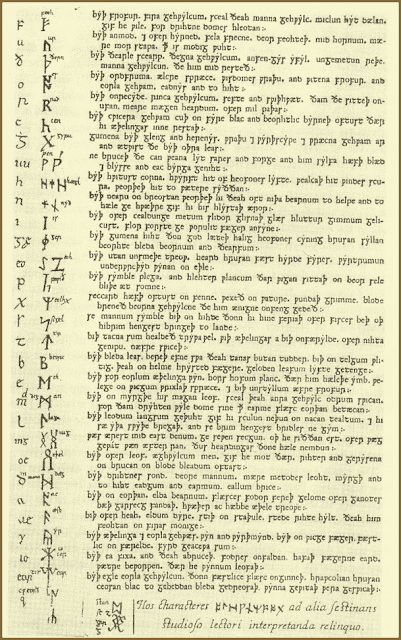 The rune that I am concerned with here is the Gar-Rune which is the Spear of Woden and the Gift of Ing. This is a Germanic Ing-Rune overlaid with the Gyfu-Rune, thus 'Gift of Ing'; this is proven by the name of Woden's Spear - G-UNG-Nr or G-ING-Nr which is 'Gift of Ing'. In the above Old English Runes certain runes have been rounded off simply because they were written by Christian Scribes. The runes are never rounded and are angular shapes. 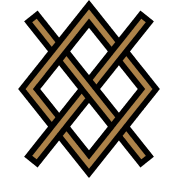 However, when we take a look at the Armanen Runes created by the German Rune-Magician, Guido von List, we find that the Gibor-Rune he uses has a line overlaid with a Sig-Rune or 'half a fylfot'.

According to von List this rune is the Gibor-Rune which was a 'hidden' Swastika, hidden by the Armanen Initiates because of its supreme secrets. If this were so then there is no reason to doubt that the very same thing could have happened with the Old English Rune-Row and to the Gar-Rune. The arms are not bent in the shape of the Fylfot-Swastika but we could see in this version a 'Double-Swastika', one going Sun-wise and the other Widdershins. If this is so then we have discovered a 'Hidden Rune' with a very profound set of meanings -

The Fylfot-Swastika is one of the most potent symbols of our Folk; it has arisen anew for good reason at this time of the Cycle of the Ages. As the Widdershins Fylfot or the "Swastika of the Return" (Serrano) this is the way back to Thule and to the return of Baldaeg after Ragnarok. 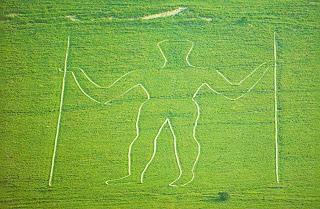 The Long Man of Wilmington is The April Fool or Divine Fool who is The Hooded Man. He is an aspect of Waendal who appears as a Fire-Serpent. The figure is shaped like the Cweorth-Rune which is the Fire-Twirl and it is quite likely that the symbol here, if it were revolved, would create a Swastika at a certain speed of turning. The figure is just a couple of miles east of 'Polegate', a name first recorded as 'Polgate' - 'Pol-Gate'. There is reason to believe, since the figure faces north, that this is the 'Gateway to the Pole' or the Gateway to Thule. The hill-figure is opening the 'Gateway to Thule' and the return to the origins.

Waendal is the English equivalent to the Norse Mundilfore, and since Mundilfore is associated with the Swastika then there is further proof that Waendal is too. The name 'Mund-ilfore' stems from the same roots as manth which forms pramantha which is the 'Fire-Wheel' or 'Swastika'. The name Prometheus could stem from the root, at least at one level. Mundilfore is the 'World Turner' which is why the Swastika is his symbol, the turning of the Earth around the Pole Star.

The Northern Gateway is the 'Gateway to the Gods' and thus to the Immortals and to Immortality. The Land of Albion itself is symbolised by the Sword of The Hooded Man - Albion - which contains within its blade the Power of Light and the Power of Darkness in balance.

The Gar-Rune is also the Rune of Albion which originally was a diamond-shape (Ing-Rune) here with the Four Directions and Four Quarters, the Sacred Centre being in the middle. This Sacred Geometry can be found in Ireland which was split into Four Quarters with Tara as the Sacred Centre. The Sacred Centre of Albion was at Beran Byrig (Banbury) marked by the 'Banbury Cross'. Here, at this point, the Island Dragons dwelt - the Red Dragon and White Dragon. These were in Eternal Conflict in these islands, and were removed to Dinas Emrys in Snowdonia, North Wales. A secret rite was done near to Dinas Emrys and a talisman of the White Dragon made and placed at Banbury Cross to bring the White Dragon back to its homeland in England.

There is a secret symbolism held in the Gar-Rune and its 'hidden' meaning; the Gyfu-Rune is static whereas the Fylfot-Swastika symbolises movement. The 'gift' is indeed the sacrifice that must be made by the English Folk in order to achieve the Final Victory. The Swastika is the energy of movement needed to awaken the English Folk to their true destiny. The 'Gift of Ing' is Fire, as shown on the White Stone of Ing, and the Holy Fylfot is the 'Fire-Wheel' that whisked the worlds into creation.

As I have said before, the last four runes - The Four Hallows - have no rune-poems, and there must have been a hidden meaning in this. What we need to consider in dealing with this subject is that, according to Guido von List, there was a Hidden Order of Armanen Masters, Adepts and Initiates that held on to these Sacred Mysteries and passed them on from generation to generation. And these 'Hidden Masters' were in contact with what is known as the Great White Brotherhood which guides our Folk in this struggle.

Norse Mythology was written down in Iceland and Scandinavia, mainly in Iceland as regard to the actual myths, and the Younger Futhark (as Hamasson has said) reflects this tree-less region of the world. The Ar-Kan Runes have been developed from the Northumbrian-Frisian Runes and have regained the trees lost in dropping some of the runes, suggesting that the 33-rune row was older than has been suggested. I believe these runes stemmed from the Lost Land of At-al-land where the English Tribes dwelt in very ancient times. The 'Druids' of these islands were not all 'Celtic' as we have proved, and this Druid Lore was based firmly around the Sacred Trees of these islands.

The Gar-Rune has the Number 0 and is The Beginning and the End, First and the Last since it can come at the beginning of the Rune-Row or at the end of the Rune-Row. It is the 'Joker' of the 'Pack' - 'The Fool'. It represents the Cosmic Joker who rules over this era in the Cycle of the Ages - the time-in-between-times. Hidden within this rune is the most powerful symbol of our times - the Fylfot-Swastika.