It is my belief that the Sons of Ingwe should unite under a common symbol, one which is simple to use and to understand, one that can be understood by everyone - the Rune of Ingwe. Using the Old English version of the Ing-Rune, as a lone symbol for our movement, and transposed upon the White Dragon as a common Flag of England, this symbol would be powerful enough to unite a people for a common cause. 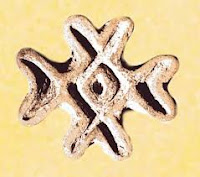 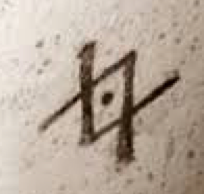 The 'dot' in the centre is the 'Seed of New Life' held within the Nation of Ing, waiting to be reborn as the new English Folk-Nation. This 'seed' now needs to be sown, from whence a period of gestation will follow, in which the seed will begin to form a new 'being' - the English Folk-Nation. Through the last couple of decades we have begun to create this 'seed', which, as with every 'seed' is a blueprint for the 'adult' form - the final form of this Folk-Nation. By taking this up as a symbol we not only reclaim our origins, and the Divine Ancestor of the Sons of Ingwe, but we proclaim our aim of resurrecting the English Folk from the ashes of its destruction.

We have all of the symbols contained in this very simple rune-stave, the Rune of Cleansing Fire and Recreation (the top version), and the Rune of Virility and fertility of our Folk that will give birth to the new Folk-Nation. Even the remains of any resistance to our manipulators will become invalid as the old symbols are thrown aside - the English Cross and the outdated White Dragon now flown by many who have no idea of its meaning and use. The new English Flag - the Rune of Ingwe on the White Dragon of the English - will replace all former symbols, symbols that are today misused and manipulated by our enemies.

This rune also contains two Edel-Runes made up from the Germanic Ing-Rune; these are the Divine Twins in their aspect of founders and creators of a new Folk-Nation. The Germanic Ing-Rune is the 'head' of both figures, joined as one in a unity of Blood and Land. This rune also bears the origins of the Sons of Ing - At-al-land - whence the English Tribes dwelt before the Great Cataclysm that sank these lands, and scattered our people around the Earth. Ingwe was hailed by the Goths - the 'Folk of God' - and these are part of the Seven Tribes of Ing that form the Sons of Ing or Friends of Ing. The roles of Woden (Warrior-Priest) and Ingwe (Sacral King) will be united again in the same Folkish Movement that must arise in these times when almost every form of resistance is being distorted and manipulated by our enemies.

From what I hear there is a growing interest in Odinism, although not at this time in quite the right way. Perhaps it would be truer to say a growing interest in Odinic Symbols. There seem to be a growing number of groups springing up around England using Odinic Symbols, but many of those involved are not so in any religious sense whatever, and know almost nothing of the religion at all. Indeed, there are a number who are not at all race-conscious, and in places we can see that there may well be groups being set up as 'stop-valves' to draw people away from the true Odinist-Wodenist-Wotanist Religions which would have the power to deliver our Folk from destruction.

Having said this I do not feel this a matter for great concern because where our symbols arise they can be manipulated, but at only a very shallow level, and such symbols have the power to work themselves and to work out a destiny of their own. As long as we have a strong Folkish Movement alive and growing stronger this will be enough to allow our Folk to find us when they have realised that the false groups have nothing really to offer, and that these groups really have little knowledge of what this is all about. That such false groups are being set up shows how concerned our enemies are of this new growth.

Some of these groups offer excitement and a new feeling of manhood, which is fine up to a certain level since it is how our menfolk should be. But strength has to be united with knowledge and wisdom and this can come only through a deeper knowledge of the Myths, Legends and the Runes. To believe in a continuum based upon Ancestral Worship and honouring our forebears means a belief in Race-Consciousness which is not recognised in all quarters today. It seems we have moved from the extreme of 'racism' upheld by many who believed in Race-Consciousness to a non-belief in the importance of Race. When looked at this way this former extreme view is probably the cause for the problems we face today, and in retrospect it seems likely this was deliberately developed by our enemies. Race-hate leads nowhere as this proves, but a love of one's own race develops a sense of Race-Consciousness in a positive way. This path we have always taken and had everyone taken it up we would be in a far better position today.

At this point what is needed is a new impetus, a new input of energy, and that can be done by using a Sacred Symbol which can take upon itself a new life of its own. We adopted the White Dragon as a unifying symbol which has certainly spread much further than anyone could have imagined. But what is now needed is a simplified symbol on the lines of such easily-identifiable symbols used by many groups today. We can use many symbols, but we need one symbol that will unite us as a Folk, and that can be the Rune of Ingwe which has so many inner meanings. This is also a rune widely used for tattoos, which again spreads it to a wider audience, even though most will not know what it means.

We have sound proof that Ingwe was the Divine Ancestor of the English in the White Stone of Ing and the Legend of Cuthman. What we have is the knowledge that Ingwe lead the Inglinga out of At-al-land, moving eastwards over the waves. In the knowledge that the original Great Cataclysm was followed by a mini Ice Age, this movement would be eastwards and southwards into warmer climates where living would be easier, though some tribal sections would have remained amongst the ice and snow in areas that were still useable. We have also the prophetic knowledge that the 'new god' of our world-age is in fact Ingwe, through the revelations in Revelations, where the finding of the White Stone is prophesied.

Through the unity of Woden (AEsir) and Ingwe (Waene) we will be able to create the True Haeldom which is part of our Aryan Mythology. Through the eternal symbol of the New Dawn - the bright and Morning Star - we shall be able to bring back to life the ancient Tribes of Ingwe. As I said, the Ing-Rune contains two Edel-Runes, this rune being that of The Hooded One - Woden. In fact the rune-name tells us this is a Rune of Odin (Odal), and it is the Rune of Race and of the Racial Homeland - Blood and Land. All of these mysteries are hidden in the Rune of Ingwe. Also incorporated into the same rune are the Mysteries of the Elves. It is the Sons of Ingwe who have the true Mysteries of the Elves. 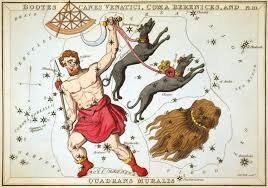 Ingwe is Arctur(us) who is the true Once and Future King, shown here as the Spear-God (or Club-God) and Hunter-God, who combines the role of the landsman (sickle/scythe). He is seen here with his Two Hunting-Dogs, crowned with Golden Stars (Corona Borealis). But there is another, and perhaps more important role of Ingwe, as the 'Driver of the Waen'. The Chariot of Ing is the Great Bear/Plough/ Big Dipper which has Ing as its driver, the force behind the movement of the Great Bear around the Pole Star.