This idea concurs with the image of Yggdrasil - the World Tree - which represents the human spine. At the base of the spine is the Coiled Serpent (Nidhog) and at the top of the tree the Eagle (High God - Woden), between whose eyes is the Hawk (Third Eye). The 'messenger' between the Base Centre and the Head Centre is called Ratatosk. Here we can see a rather hidden meaning to this, since this 'squirrel' (with a strange name) runs up and down the spinal column - ascending and descending.

The name Nid-Hog can mean - Nid (Underworld, or even death, as associated with the Underworld), and Hog (an old word for swine, pig, or boar). The name of this 'serpent' is related to the Boar.

The name Rata-Tosk can mean - Rata (rapture, ecstasy) and Tosk ('teeth' or more likely 'tusk' in this case).

Both Nidhog and Ratatosk are related in some way to the Boar. The name Ingui stems from an IE Root *eng(w)- meaning 'groin', the area of the Base-Centre. The IE Root *Ng(w)hi- means 'serpent, hence the link between the groin, the serpent and Ingwe (the Inga-Force).

The downward-current is ALU, whilst the upward-current is ULA, at least in our own Wodenic Lore. This is actually borne out by the word Alu which is the equivalent of the word Ilu meaning 'light' or 'God'. Leaving aside the usual religious ideas of 'God' and using a more scientific term, 'God' here refers to the Highest Consciousness (SWAR). What we have here is a much more spiritual idea of Kundalini and the Fire-Serpent, since its 'awakening' comes through the Highest Spiritual Light descending to awaken the Sleeping Goddess. This idea of Sri Aurobindo may explain why many may well experience a physical form of this awakening, whilst the spiritual form would take much time and a devotion to the Highest Godhead. This would take the form of active work throughout one's life, rather than exercises designed to awaken this energy.

This is why Aurobindo goes on to state that - 'The ascension and descent of the force in this yoga accomplishes itself in its own way without any necessary reproduction of the details laid down in the tantric books.' 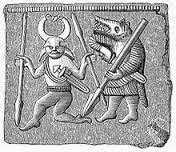 In the above bracteate found in Sweden, and on the Finglesham Buckle found in Kent, the figure of the warrior holds two spears, one that points upwards, and one that points downwards. We have here some kind of confirmation of what Aurobindo is saying -

The question we should ask ourselves is whether the Seven Chakras (or Nine Chakras in the Hidden Lore) are actually 'lotus' flowers that open out, or whether they are wheels (the meaning of the term 'chakra') that revolve. An activist in WF some years ago had a vision in which the chakras were like Black Suns which revolved in opposite directions with the upward-movement of this energy. Yet another option would be that they are like spirals which twist and coil in certain directions with the movement of this energy. The concept of the worm-hole could be linked to these ideas, since a 'worm' suggests a 'dragon' (wyrm) and thus a coiled serpent. 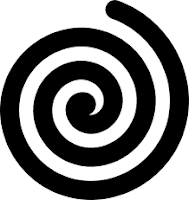 The idea that a descending current awakens this 'sleeping goddess' obviously relates to the Shiva-Force out of which descends the awakening-force. This seems to fit the Solar Myth where the Aryan Hero awakens the 'Sleeping Beauty', such as the Myth of Sigurd-Siegfried. The 'Solar Hero' here represents the Solar Consciousness which moves downwards, 'kisses' the Sleeping Beauty, who is then awakened by this Solar Energy. This may well be related to the Boar Symbolism because the Boar of Ingui-Frey is the Solar Boar whose Golden Bristles represent (at a physical level) the Sun's rays, but at a higher spiritual level the Highest Consciousness (SWAR) which are the 'Golden Cows' of the Vedas. It is this energy from the Highest Consciousness that descends to awaken the Sleeping Goddess - Freya/Idunn.

In the Legend of Sigurd-Siegfried we find the Solar-Hero having to ride through the Ring of Fire in order to reach the Sleeping Valkyrie, which at one level is his Higher Self or True Self. The Ring of Fire suggests a link to the Brosingamen Necklace of the Goddess Freya, although this usually represents Sacral Kingship. However, the 'necklace' is often seen as symbolic of the female genitalia area due to the shape of a necklace hanging around the neck being like an inverted triangle (Trikona). Hence, maybe, the connection to the groin area or Base Centre.

The Myth of Idunn as found in Odin's Raven Galdor is that of the 'Sleeping Goddess', where she sleeps under a White Wolf Skin. This is seen to represent the white snow of the Northlands, which is no doubt true, but at another level this could represent the 'earth-bound' (Base-Centre/Bodn) where lies the Coiled Serpent. This is the Ur-Centre, associated with the Aurochs (Ur-Ox). The Goddess Idunn guards the Golden Apples of the Immortals; her awakening is necessary so that the energy rises upwards to the head-centre and beyond, in the process of bringing immortality and the creation of the God-Man.

The symbolism of Yggdrasil is that of the transformation of the Earth-Bound or physical (Serpent) into the Astral-Heaven or spiritual (Eagle). In the process of the arising of the Fire-Serpent the Third Eye is opened (the 'Hawk's-Eye'). This is achieved by a Tantric Love Rite as found in the Myth of Knit Mountain, which I have covered before and need not repeat it here.