It always seems controversial when you give the meaning of the Edel-Rune as Blood & Soil; yet this is the best way to describe this rune. There are various rune-sounds given to this -

If we trace this back to its original root this is - *at-al - the Indo-European Root-Form which means 'race'. There is also an Old Icelandic athal which has two meanings -

Thus meaning 'Race Homeland' or 'Racial Lands' which is where our Folk developed in the far distant past. Whether this is the lost Atlantis matters little since the name serves for an Archetypal Myth and we do find the name Atland in the Oera Linda Book. This can also be spelt Altland or Aldland which presumably stems from 'old-land' but which, I feel, may well be a misinterpretation of the original, or even a double-meaning given to the word by ancient seers.

There is also another meaning given to the Root *at-al and that refers to 'man' and to 'over' or 'beyond', hinting at the Overman (Superman) or the 'man who goes beyond' which refers to the evolutionary-drive towards immortality, going beyond the human state as we know today.

The rune-stave as shown above (work of Hamasson) tells us that the Edel-Rune is made up of two Sieg-Runes back-to-back, and in this case one white and one black - Black Sun-White Sun. This is also the 'Union of Opposites' which, within our own Wodenic Lore, has to be the 'Sacred Marriage' that takes place, after which the Initiate goes beyond in order to create the Absolute 'I' (Miguel Serrano).

It is important to note that this is one of the runes that has the hidden meaning of 'Gift of Ing' being a bind-rune of Gyfu and Ing (Elder Futhark). The Ing-Rune is also a bind-rune of -

The Ing-Rune is the Rune of Blood (DNA Spiral) and it would seem that some scientists now believe that within the DNA is an encoded 'survival gene' which means that the survival of one's Folk is encoded in our DNA. Seemingly, those who betray their Folk and Nation do so because they have lost this 'survival gene' or perhaps it has been mutated through their stance on self-destruction, which is what they do - self-destruct. The Ing-Rune also has the meaning 'Gift of Ing' through its bind-runes of Gyfu and Ing. The two Edel-Runes make this a symbol of the Divine Twins joined at the head, a symbol that is very ancient I believe. 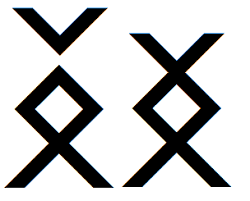 The Ing-Rune with the 'crown' of the 'Crowned and Conquering Son' which Hamasson pointed out. This also adds a Germanic Kenaz-Rune to the Edel-Rune which relates the whole thing to 'Fire', kingship actually being related to 'Fire'. This is not only a physical 'crown' but also the hvarena which is the 'Fire of the Aryan Race'. In the stave shown on the right we have the Kenaz-Fusion version of the Ing-Rune - again 'Fire'. In fact, within the Ing-Rune we do have two different forms of 'fire' -

The 'crown' on any 'holy man' can be seen as a Halo of Light, a bright golden ring around the head. This is the 'Crown of Glory' or the hvarena which is the sign of true Sacral Kingship. We are back to the Old Icelandic meaning of 'chief', 'head' or 'principle'.

The Aryan Root *at-al gives us variations of names given to women, all names based upon this rune, and all having the meaning 'noble' -

We should also remember that the two versions of the word using either 'd' or 'th' are merely slight alterations in the sound. Sometimes I write this as 'dh' which may come closer to the original sound - where the 'd' is sounded but with the lips as 'th'. If you practice saying 'd' you will notice that the tongue touches the upper part of the mouth, but when doing the 'th' as in 'thin' it touches the teeth with the sound at the back, but 'th' as in 'the' is the same but sounded at the front of the mouth. If you touch the teeth and sound 'd' we get 'dh', the sound in between the two. 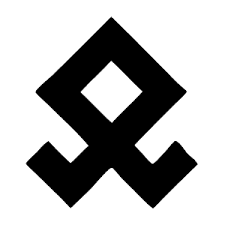 This is a variant of the Edel-Rune, usually called the Erda-Rune, the name suggesting the 'Earth' or 'Mother Earth'.