The Mysteries of Feoh 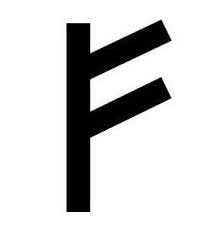 Feoh is the first rune or 'Primal Rune', coming at the start of the FUTHORK; its usual meaning is 'wealth' or 'cattle', both of which have the same basic symbolism. I have covered this before and would now like to look at another angle to this rune. It was the rune chosen by Gandalf the Wizard as his symbol, which he etched upon Frodo's door (Frodi's Door). Frodo, thus equated with Ingui, is the hero of the Shire-Folk who eventually destroys the Dark Forces of Sauron by destroying the Ring of Power - though in the end he has to have the aid of the evil Gollum to do it.

The Norwegian Rune-Poem sees wealth as 'friend's discord' which brings into play the idea that wealth can be a problem amongst friends due to mankind's way of seeing wealth and gold in a very different light than it should be seen. The second verse of the Norwegian Rune-Poem is more enlightening -


Thus this verse tells us that the -

'Wolf grows up in the forest.'

'The Wolf feeds in the forest.'

'The Wolf is born in the forest.'


We have seen how this is the First Rune or Primal Rune, and this phrase about the Wolf and the Forest is important since the basis of our Folkish Wodenism is The Hooded Man who is the Son of Herne, who is the 'Lord of the Forests' or 'Lord of the Trees'. And that Wid-Ar is the Woodland God who rules over this era of the Cycle of the Ages. Wid-Ar is directly connected to the Wolf through the Wolf-Hook Rune which is the Rune of Resistance. Wid-Ar is the God of Resistance.

The forests are one of the last wilderness areas, and even here in the South of England they have places that few people go into, though these are becoming rarer, no doubt not accidental. The forest is the natural dwelling of the Wolf's Head - the 'outlaw' - the best example being that of Robin Hood. There are also direct links between Woden and the Woodland through his name -

All of these roots are connected to the woodlands or forests; Woden is the father of Wid-Ar who is the 'Woodland God' and the god of the New Age. Woden is swallowed by the Fenris Wolf, which is symbolic of our modern technological age which has 'swallowed' the Spirit of Man by locking man into the material world alone. It is Wid-Ar the Avenger who breaks open the Wolf's Jaws and frees the Spirit of Man (Woden).

According to our own unique mythology the First Man and the First Woman were created from Ash (Ash-Tree) and Embla (usually seen as the Elm-Tree), and we are thus linked to the World Tree and thus to the woods and forests too. Our oldest god was the 'Lord of the Forests' or 'Lord of the Trees'. 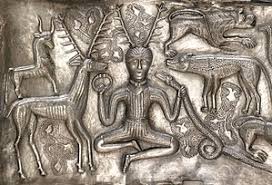 The above is aways seen as 'Cernunus' which is a Celtic word for 'Horn' or 'The Horned One. This is Herne the Hunter in Wodenic Lore, an aspect of Woden as the 'Lord of the Trees' or 'Lord of the Animals'. This is from the Gundresrup Cauldron found in Denmark and originally said to be 'Celtic' but some scholars now suggest a 'Scythian' origin'. The symbolism is interesting -

When two Feoh-Runes are face back-to-back, each at an angle, they make up a road-sign used to indicate a Stag. These are the Horns of Herne seen on the symbolism above. As shown before, the name 'Herne' is 'Herian' which is a title of Woden in his wilder aspect; it is related to the Here/Heri who were raiders and plunderers in Germanic Lore.

The Wodewose (Wuduwasa), shown above from a church in Saxmundham in East Anglia, is the figure of the 'Wild Man of the Woods'; the root wode relates to Woden and well as 'wood' both phonetically and symbolically. The glaring similarity to the figure holding a club can be seen in the figure of the Cerne Abbas Giant (Herne the Hunter/Orion the Hunter) - 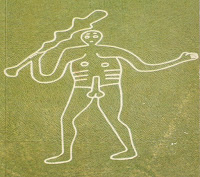 The above is another depiction of the Wodewose which is also found in a church in East Anglia; as I have shown before, the family arms of the Waendal Family shows a 'jester' figure holding a club. The Long Man of Wilmington is 'Waendal' in his spring-summer aspect, as opposed to the Herne Giant who is the winter aspect (Cygnus and Orion respectively).

As 'wolf's heads' in a world decaying, degenerate and falling into rack and ruin, we have to withdraw into the Ancient Forests; this we have been doing by holding our rites and camps in woodlands around England. By embracing a less 'civilised' approach and a more 'barbarian' approach we come closer to the wilds, to the wild-wood, and to the ancient 'Wild Man of the Woods'. There is something primal and instinctual about the woodlands, something even our enemies fear.

Richard Wagner, the famous German composer, saw deep into the ancient Germanic Myths. Siegmund, according to Wagner, was fathered by 'Wolfe' and Hunding says that Siegmund is of the House of the Wolfing. According to this Wolfe and Siegmund fled into the 'wildwood' and there lived for 'many a year', having to survive at all costs against great dangers. The father of Siegmund was Walse (Volsung); the son of Siegmund is Sigurd who has a 'snake in his eye' (we see this in Sigurd Snake-in-the-Eye, son of Ragnar Lodbrok and Aslog, the latter being the daughter of Sigurd and Sigdrifa/Brunhild.

According to these accounts Wotan (Woden) fathered the Wulsunga-Wulfinga Line in the ancient forests of Germania. We see here a symbolism of the creation of this Divine Race in the wildwoods, and through Woden in his role as the 'Wild Man of the Woods'. There is one last connection that I would like to point out here, something found in Celtic Mythology, though in reality this has Germano-Celtic origins from the North. This concerns a figure called Fer Caille which is the 'Man of the Wood', described as a hideous black giant with spiked hair, a single eye, foot and arm, and brandishing a club. (*) One of the symbols attached to this 'wild man' is the Boar, symbolic of Ingui-Frey. Also within this story is a figure called Ingcel who is a one-eyed warrior. This saga seems based upon tales around the Scylding Dynasty since there we find a similar tale in which Ingeld features. Since we have found cases of Germanic Tribes in Ireland at an early time these things are not as 'astounding' as they look.

(*) The single, eye, foot and arm is symbolic of an ancient stance known as the 'Crane Stance'. This seems to bring together three distinct parts of the human body connected to the Aryan Caste System - Eye = Woden = Head = Kon; Arm = Tiw = Earl; and Foot = Wayland = Ceorl. There is also (left out) the Groin = Ingui which is the farmer-provider running parallel to Wayland as the craftsman.