The Peorth-Rune is a glyph of Beorc opened out - of the Birth-Mother giving birth. Birth takes place through the birth canal which is a form of 'portal' or 'gateway' to this Earth. Thus, the Peorth-Rune is also a 'portal' (p[e]ort[he]) or 'gateway' from our world into parallel worlds; this is the Rune of the Gateway. On the other hand, when turned over on its 'back' it becomes the Swan-Ship which sails upon the Waters of Chaos, but also the 'waters' that divide our world and the Otherworld. The idea of 'The Ferryman' can be found in Germanic Lore as well as Greek Lore.

I once had a dream about this rune which can be used to 'break the fetters'; this was not so clear then but today we know that in order to reach into other realms (of consciousness) we have to 'break the fetters' that bind us to the material world. This is the 'Gate of our Forefathers' through which we can contact the Forefathers, and also other worlds such as the Realm of the Gods and Realm of the Elfin-Kin.

This can also be symbolic of the Well of Wyrd and here we have the association with the White Swans which guard the Well of Wyrd; as well as the association with the Walkyries - 'Swan-Maidens'. Thus the Swan-Ship; and also that of the link to Lohengrin - the Swan Knight. On the ends of the ship are 'swan-necks' which can be found back in the Bronze Age in Scandinavia. These are the Swan-Ships of At-al-land' - we are going back to our English Roots. 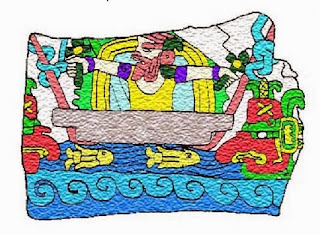 Here the Red-Bearded 'White God' is seen in his ship with a 'portal' behind him, through which he comes to Earth. His is the 'Gift of Ing' as seen in the X-XX markings on the two heads through which the ship passes. This is a Serpent-Ship which is an alternative symbolism. He bears the White Stone of Ing which represents a 'New Age' dawning. He bears the Hammers of Thunor or the Cross of Krist.

In birth it is a fact that blood is spilt; when we consider the slaughter of cattle that took place as the Age of Ing was being 'birthed' is this really a 'coincidence'. We have thus 1999 as the year of 'conception', 2000 was the year when there was a planetary conjunction of significance (nine months after August 1999) and in 2001 the slaughter of over 6 Million cattle and sheep. took place here in England. These were, coincidentally, the years when the Lord of the Rings trilogy films went out, in December (Wolfmoon) of each year. One thing does seem clear that in ancient legend the 'Sacrificial Bull' is slain to usher in a new era - even if this is not done consciously.

Of course, the 'Gateway' or 'Portal' in the Mayan Stela seems linked to Kukulkan or Quetzalcoatl, the latter known to be linked to Venus - the Morning Star. This is associated with the Waene-Gods and thus to the Elves who seem closely linked to this set of Gods. Ingui-Frea is 'Lord of the Elves' and Idunn is a Dis of the Elfin-Kin. The people most closely associated with the Elfin-Kin are the English many of whose names are linked to 'Elf' or 'AElf' - AElfred, AElfric, AElfstan, etc. The link between the Engel-Kin and the Elves goes back into the mists of time and held bound even when the bond between Man and Elves was broken.

This is also shown when we see the most ancient symbol of Albion - Island of the Elves - the White Rose. This is connected to York and to the White Boar of Ingui-Frey. Richard III fought under the White Boar and his was a symbolic defeat of the White Boar-White Dragon. At one level the Ing-Rune in its Germanic form is symbolic of the Morning Star - Venus. It is said that England in ancient times was shaped as an elongated diamond.

There are certain areas of the world that are 'portals' to other worlds; one of these is Woden's Burgh ('Adam's Grave') in Wiltshire which is near to Wansdyke ('Woden's Dyke'), a very famous earthworks. This 'portal' is mentioned on a plaque in a nearby church, retaining its secret into Christian times. Another local church is built over a stone circle, now hidden under the floor of the church. There is a very interesting book called 'Wulf's Gate' by Matthew Lehman which is based upon the same idea of a 'gate' or 'portal', in this book a 'gate' between Man and the Elves.

The word 'portal' is from the French portail and the Latin portale deriving from the Latin porta and thus to the English 'port' meaning  a 'gate' or 'entrance'. Since there was no 'p' in the Teutonic Tongues then the use of the letter may well have been to hide the meaning 'port' in a way that its discovery would not be too hard. This is equivalent to the English 'fare', one of whose original meanings meant 'a course' or 'a passage' when used as a noun. There could thus be some hidden connection between Feoh and Peorth. Also, P-eorth could refer to the Earth, and a 'gateway' on the Earth.

Gateway to the Gods