The Haegl-Rune is shown above; simply it is twin upright staves and two angled cross-pieces. But if we look more closely at the symbol it is actually made up of two Ur-Runes, one upright and the other upturned - UR-RU. But it is also made up of a downward-stroke Ken-Rune and an upward-stroke Ken-Rune in reverse. This is interesting in that it would suggest a male-female binding. This parallels the use of the Hagal-Rune by Miguel Serrano who sees this as the Union of HE/SHE, but using the Man-Rune and Yr-Rune from the Armanen Rune-Row.

The twin Ur-Runes obviously relate to origins, and the twin Ken-Runes to fire; there is an Ur-Fusion and a Ken-Fusion making up the Haegl-Rune of the English Rune-Row. The concept of the Ur-Fire is suggested for this rune-stave, and yet it is a rune of frozen ice (hail). The Norwegian Rune-Poem tells us that 'hail is the coldest of corns', meaning that it is frozen ice. The Icelandic Rune-Poem has much the same - 'hail is cold corn and driving sleet'. Yet the Old English Rune-Poem starts with the same idea - 'hail is whitest of corn, from heaven's height it whirls' - but then adds a very important point - 'winds blow it, it becomes water after'. This last sentence suggests that there is another element within the meaning of the rune-stave - heat and fire. This is actually suggested in the Icelandic Rune-Poem in the phrase 'sickness of snakes', for snakes are cold-blooded animals.

There is a rendering of the Ur-Rune which has within the stave 'droplets' that suggest 'drizzle'. Indeed, the Icelandic Rune-Poem has for the Ur-Rune the meaning of 'drizzle'. Drizzle, in this case, is symbolic of the heating of ice which turns into water and then into water-vapour - all of which happen through the application of heat at different levels.

The primal building-block of creation can be found in the concept of Niflheim which contains the 'mist' (drizzle) which forms from the conflict of Ice and Fire. This is found in the modern scientific term nebula which stems from the same IE Root *nebh- meaning 'mist' or 'cloud'. The meaning given in the Icelandic Rune-Poem is thus related to the nebula which is a gaseous mist from which new stars are formed. This is thus the building-block of creation. It is interesting to note that the Welsh version of the Wild Hunter-God is Gwyn ap Nydd meaning 'Gwyn (White), Son of the Mist'.

If we use the Common Germanic Futhark version of the Hagal-Rune (as shown above) we still get the Ur-Ru symbolism, and we still get the twin-Ken-Runes too, so there is no real difference between these two versions. The main point, I believe, is that the rune shows a symbolism of turning the static state into a state of flow and movement - Ice (static) turns into Water (flowing). The third force needed to make this happen is Fire (heat) which must be inherent in the rune-meaning in order to create the wholeness of the rune.

It is the Rune of Wholeness (Heil/Hael) since it contains the balance of opposites within the same symbol - the balance of Ice and Fire. But it also contains the very basis of life, through the Hagal-Rune (Snowflake) being the core of the Seed of Life and the Flower of Life. The rune is thus the basic building-block of life itself, and of creation (which occurs at every moment and is not just a point in the past when everything was 'created'). 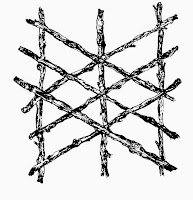 The Hagal-Rune is also the central point of the Nine Glory-Twigs and is thus the basic building-block of the Mother Rune (as well as the Gar-Rune). The central column contains the following runes which are symmetrical -

Thus we have the Primal Crystal of Life (Hagal), the Sacred Centre and Axis-Column (Gar-Rune), the DNA Spiral (Ing-Rune), the Serpent - Life-Force (Ior-Rune), and the Sky-Father (Tir-Rune). There is here a strange kind of 'pattern' evolving -

Hagal - the 'crystal' or 'pattern' of life-forms; the pattern of creation. The Union of the Male and Female - Union of Opposites.

Gar - the Sacred Centre and World Pillar; the spinal column or Mount Su-Me-Ru, up which the Fire-Serpent rises.

Ing - the 'double-helix' or Twin Coiling Serpents which move upwards along the spinal column (Pillar/World Mountain).

Ior - the Serpent, in this case related to the Fire-Serpent. Ior-mun is a variant of the English Eor-men which is related to 'Irmin', which can refer to a pillar or post, but can also mean 'to set into motion'. The Sacred Column is the Irminsul and the Spinal Column of Man.

Tir - the rune-stave suggests upward motion or movement upwards along a column. Tiwaz means 'The Shining One' so we have the suggestion of 'enlightenment' or 'awakening' here.

The 'Union of Opposites' occurs at the Crown Chakra and is Miguel Serrano's 'HE/SHE'. This, of course, is not the final stage in our work, for this involved going beyond to the Black Sun and the Green Ray, and the creation of the Absolute 'I'. This stage, of course, could be seen in the Is-Rune which I omitted (deliberate mistake I assure you) from the runes above.

There is also another hidden 'pattern' within the Nine Glory-Twigs since we have three distinct and similar runes on the central column - Hagal-Ior-Ing. All of these contain the Gifu-Rune or 'Gift-Rune'. Ing, of course, is the 'odd one out' here since it does not have the central column; this further suggests the movement (of the Fire-Serpent) within the 'channels' (Ida and Pingala) at each side of the spinal column.

There is also the Ger-Rune which symbolises the yearly cycle or a full cycle, as well as the 'harvest' obtained through the rewards of what is sown previously. The Hagal-Rune is also the 'seed' (Seed of Life) which gives new life and new birth - creation. Science, or at least the more advanced form of science, now knows that the 'seed' is far more than it seems, for it contains a blueprint of the final form of the life. This may look like a tiny 'speck' but in reality it contains the end-result of the life-form, as it is when fully formed. The Germanic Ing-Rune forms part of the Ger-Rune and is the 'seed' of new life; it is the 'blueprint' for the fully-formed life-form.

We can certainly say that the Haegl-Rune contains Hail and Heil as a Rune of Balance, the balance of opposites in one symbol. As the Rune of Wholeness it is the 'Seed of Life' which contains the blueprint for the fully-grown form; it is 'whole' from the very start of the process of life and growth. This, I think, is how the 'aura' is viewed, as the true form from which the physical body is formed. In regard to the Heil or 'wholeness' we may see this as the (re-)creation of the Astral Body or Body of Light. Again, advanced science has postulated that Light affects the DNA Spiral.

What I have shown here is that the secret of the Nine Glory-Twigs lies not only in that it is the 'Primal Matrix' of the rune-staves, but that the positions of the staves within the whole are important too. The crystal is the basic form of life, and the Haegl-Rune (in its Hagal form) is the Crystal or Krist-All.

Posted by Wulfinga at 12:50 No comments: