Here we see Ahura Mazda (Iranian) holding the runic stance OS; this seems to be symbolic fo the High God. Here he is shown holding a Ring of Power, but in other versions, and that of the god Ashur, we find the figure holding a Ring of Power and Rod of Authority/Justice. The symbolism here is of the Winged Globe.

Here we see Ea, a Sumerian God, in the AC stance; he holds the 'pail' which I have mentioned in other posts. Again, this is the god Enki, again shown in the AC stance. 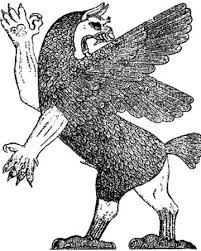 This the the goddess Taimat, again shown in the AC stance. 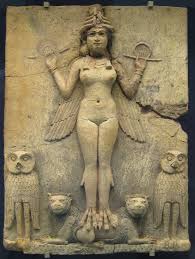 Above is the Sumerian Goddess Inanna, whose name is so close to the Norse Nanna as to be obviously linked. She stands upon Two Cats with Two Owls beside her, and hold the CWEORTH stance. She holds a Rod and Ring in her left hand. 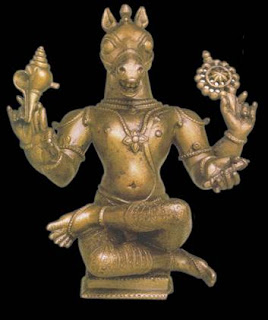 One thing that stands out clearly here is that every one of these stances can be found only in the English Rune-Row. None of the above rune-shapes can be found in the Elder Futhark.

I have shown in previous posts how the Peorth-Rune is a stance used by players of Taefl. This one does appear in the Elder Futhark. It would seem that the playing of Taefl is a kind of 'portal' or 'gateway' to the 'Game of the Gods'. You can see from below that the player on the right holds a Drinking Horn, which suggests that what they are doing is no mundane 'game' but is a Sacred Ritual where the 'Game of the Gods' is played. This again suggests that the players are 'possessed' by a god-force, thus moving the pieces through the Will of Woden. 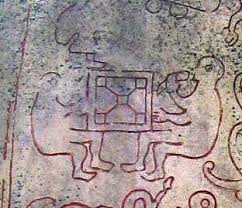 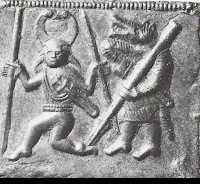 In regard to the Os-Rune and the stances connected to this rune, this seems to justify the difference given to this rune and its counterpart in the Elder Furthark. The Woden Initiates here in England replaced the AEsc-Rune with the Os-Rune, because this is the Rune of Woden, the Rune of Kingship. This seems clear when we recognise the symbols associated with this rune-stance, the Rod and the Ring. The ring is the Ring of Power which Woden possesses - Draupnir - and the rod is the Rod of Rulership since in some depictions of this stance the rod is marked like a 'ruler'. The IE Root *reg- means 'to move in a straight line', hence why the ruler is linked to a 'ruler'; he is the one who is responsible for the Sacred Measurement of the Land. 'To move in a straight line' also hints at his ability to move into other worlds, especially the Ancestral Worlds.

The term Os or As refers to a god, to a divine being; it is also connected to the idea of the Sacred Centre or World Pillar. This is why the gods live in As-Gard which is the 'As-Yard' or 'Yard of the AEsir-Gods'.

The AEsc-Rune was then placed in the Fourth AEttir as the Rune of the Ancestors, or the Rune of the First Man/Primal Ancestor (Askr). Bede used the term AEscingas for the line of Hengest and Horsa, whereas the usual form is Oiskingas. Maybe he was not wrong at all over this since the two names are merely variations of each other. Since Woden is the 'Divine Ancestor' of our Folk he is given the title Oski/Osci or AEsc. The two runes are thus interconnected and one must be studied in the light of the other.

This rune can also represent a 'banner' or 'flag' flying in the wind; the banner/flag is a symbol which actually represents the tribe/clan - which is the tribe/clan. This is why it is held next to the king, and guarded with the life of its bearer and guardians. It is a Sacred Symbol. 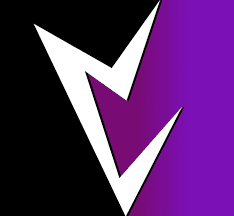 Another interesting symbolism lies in the Vril Symbol of the Vril Society which is said to have existed in Germany before World War II. The symbol, as I have said before, can be seen in the light of a Chinese figure called 'Monkey holding the Peach', a clear symbolism of the Fruit of Immortality. But when we analyse this symbolism we find three clear points -

In The Lost World of Agharti by Alec Maclellan we find what he says is a description of Vril-Power held in secret documents which 'once belonged to initiates of the German Vril Society'. In fact, this also appears in an earlier work by Robert Charroux. Whatever the source of this, I feel that this matters less than the actual details - judge for yourselves.

That is just about as 'clear as mud' as you can get! But, there are certain points here that give clues to the meaning of this -

Once again this is far from clear, but Occult Adepts always have to put down these secrets in code so that non-initiates cannot use them and abuse their powers. The 'violet-coloured light made by an amethyst' (*) is the colour of the Vril-Symbol but it seems that the amethyst is used as a vibratory-power to stimulate the Third Eye. Add to this the 'Letter K' which may well represent the Ken-Rune, Rune of the Fire-Serpent, and it is clear that this technique uses sound vibrations that include rune-gealdor. Again, the 'Sign of Saturn' is used here suggesting some form of alchemical transformation from 'Lead' to 'Gold'.

(*) The key to these mysteries lies in the name 'amethyst' which is not an arbitrary name, but one obviously related to its vibrational properties. It stems from the IE Root *medhu- which means 'honey', or in particular 'mead' as the word itself suggests. It would seem quite obvious that the mead that we drink is but a pale symbolism of a much deeper and profound concept, and that is the 'honey-taste' that has been linked to yogis who put their tongue to the back of the throat after intense meditation, thus 'collecting' this. It would appear that this may be linked to the secretion of DMT which is a mind-altering chemical whose make-up is similar to serotonin and melatonin which is produced from the Pineal Gland. This is the reason why in later times, when these psychic powers were lost in our Folk, certain mind-altering herbs were used as a substitute for these lost powers. Certain people who have a better ability to achieve higher states of consciousness can do so without these drugs.

The similarity between the Vril-Symbol and the Peorth-Rune is very noticeable, and the meaning of a 'portal' or 'gateway' must again be significant -

In one of his writings the infamous Aleister Crowley mentioned a parchment found on his person having the form VRIHL on it. He suggested that the meaning given to this was a psycho-sexual method by which communication with 'extra-terrestrial powers' could be made. Of course, if we use the term 'extra-dimensional powers' this makes more sense. But here the links come together again -

Of course, the term 'Vril' most likely stems from 'virile' which suggests a male-orientated force. The term vira comes from this, usually meaning 'man', but in particular a 'hero'. Looking at the Peorth-Rune Stance again, used at the Taefl-Board, the drinking-horn would link to 'mead' and thus suggests that the game itself was used as a form of intense concentration producing altered states of consciousness. As I have stated before, many modern versions of Taefl are a game where the participants have to use their own ability to make the moves; in eld-times the game was played with dice and thus 'chance' was the major factor.

One of the keys to these mysteries is the violet-purple light emitted from the amethyst. These mysteries are also held in the Gar-Rune and the Graal-Runes of the Ar-Kan Runes. 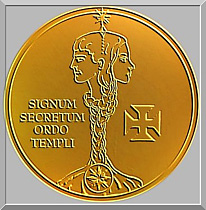 The male-female ILU-Forces join together in the figure of Baphomet and as shown here are associated with Venus and the Black Sun (the eight-pointed stars shown at the base and crown). This produces the ILUHE-Force which is the primal power (Ur-Il = Vril). This is found in the Ilu-Ishtar texts where these are clearly associated with Ishtar-Eostra - Venus.

ALU-ULA - The GAR-IL (Male Force) moves downwards from the ANSUZ-CENTRE (Odroerir) along the Serpent Column, through the LAGU-CENTRE (Son), down to the URUZ-CENTRE (Bodn) where the Sleeping-Goddess lies under her White Wolf-Skin. Through the Power of the Black Sun the Sleeping-Goddess (ILUA) is awoken and she arises from the URUZ-CENTRE (Bodn), moves upwards along the Serpent-Column, through the LAGU-CENTRE (Son), and thus to the ANSUZ-CENTRE (Odroerir) where the 'Eye of Woden' is awoken as the Woden Initiate is 'bathed in a sea of ultra-violet/purple rays'.