The term SWAR is the Vedic name for the highest heaven of the superconscious, the Realm of Pure Light and Truth. The Old English Sweorth means 'Sword' and in many Aryan Cultures this term referred to this Higher Consciousness. We have a clue to this in the meaning 'Ritual Fire' or 'Cremation Fire' since 'Fire' is 'Light' and the two terms are interchangeable. The Cweorth-Rune is the Sweorth-Rune, thus linking the Sword to Ritual Fire and to the Highest Light - the Sacred Flame of God.
Hamasson has equated this rune with the Broken Sword, and there is reason to believe that he has stumbled upon something of extreme importance here. To understand this we have to go the the Vedas and to the Fire-God, Agni, who is none other than our own Ingus. Agni is associated with the Angirasa who have been called the Mythical Luminous Race. The Angirasa are -
The Powers of Light and the Flame,
Sons of the Flame,
The Recoverers of The Light,
The Bearers of the Divine Word.
The last of these - 'The Bearers of the Divine Word' - tells us that they are linked to 'The Word' and, as I will show, to the 'Broken Sword'. Here we have a subtle play on the terms 'Word' and 'S-word', where the 'S-Word' is the 'Sun-Word', the Word of Light. The 'Broken S-Word' is the 'Lost Word', the letter ng which is the basis of 'Ing' or 'Ingus'. This was broken into 'n' and 'g', whereas in the beginning this was one sound, one letter - broken by the Dark Powers in order to hide the Heildom behind the word. They did everything they could to destroy the roots of the English Folk and their being descended from the Luminous Race and their Divine Ancestor, Ingus.
The Dark Forces ruled by the 'Lord of the Shadows' has done everything possible to hide the Higher Light from mankind, to create a wedge between our consciousness and the Highest State of Consciousness - SWAR. This is reached through the Gateway to Thule, since SWAR is not only connected to the 'Sun', as 'Higher Light' but also to the 'Swan', the Symbol of the Light of Truth. The Swan is the Symbol of Thule.
Cweorth is related to the Latin name for for the Apple - quercus - and to the Celtic quert used in the Ogham. The Golden Apples of Immortality are for the Race of Heroes, guarded by the Goddess Idunn. It is from this Race of Heroes that Sigurd-Siegfried arises to wield the Broken Sword; it is from this Race of Heroes that Parsifal arises to wield the Spear of Woden. Parsifal is Sigurd reborn in order to complete this Archetypal Myth.
The 'Word-Sword' in the Graal Mythos is related to the 'Broken Sword', and to the Well of Kunneware which is the source of the Magic Spring. Above the Sacred Well is a globe upon which sits a Dragon. The Dragon is the Guardian of the Well, and the 'globe' is a chakra. The sword withstands one blow, but is shattered by the second blow. It has to be taken back to the Spring (Well) where it will become whole again through the flow of water. This water at at source is below a grey rock before the light of day has shone upon it.
Hidden within this piece is the source of the reforging of the Broken Sword, for the 'water' is the Absu/Apsu - the Waters of the Underworld. This is why this is done 'before the light of day has shone upon it'. The source of this reforging is not of this world, it is of the Other-World, and from there the Sacred Sword is manifested on Earth in physical form - as a Folk-Hero. The 'Word-Sword' has grown old, has atrophied and lost its ancient power; Only through discovering the Source of the Power can the Word-Sword be renewed - this source is held within the Other-World, the Inner Earth, and that source is the Black Sun. 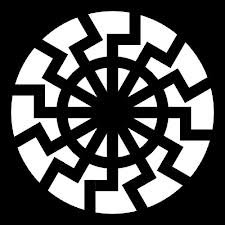 Ila - Primal Word of The Truth

The Sound of the Stars

That the stars give off melodic sounds is quite well known today; we know that the composer, Holst, wrote themes connected to the stars and planets, and thus knew this concept well. What is not so well known is that our Anglo-Saxon Ancestors would also have known of this phenomena. As usual, we have no written records or details, and in this instance we will have to rely upon our English Word-Hoard to find the truth of the matter.

The clue here lies in the word tungol which means 'tongue' and relates to the idea of 'to quiver', or 'flicker'. The stars do 'quiver' or 'flicker' as we all can see, but the term 'tongue' suggests sound since this is the means we utter sounds from the mouth. It seems that this must refer to the 'Sound of the Stars', a phenomena known to our English Ancestors.

The root of the words radur and rodor is *rad-, clearly connected to the Rad-Rune; in this instance it is connected to the 'Sound of the Stars'. We have the word 'radio' to tell us that this is indeed connected to sound, as well as movement and rhythm.

Some people who have experienced 'OBEs' (out-of-body-experience) have stated that they hear sounds associated with different levels of consciousness attained during such an experience. Different 'spheres' have different melodies, it would seem. Music of some sort was used in ancient rituals, chanting, incantation, etc. There is also a subtle link between the idea of sound, rhythm, and measurement, as well as vibration and energy.

Posted by Wulfinga at 10:08 No comments: