hallucination - seem to see something that is not really there.

Hallucination - error, delusion, perception of things that do not exist.

Two different dictionaries dated some 100 years apart, both claiming that a 'hallucination' is something that does not exist, or is not really there. No-one appears to have taken deep thought as to how one can see something that is not there! Many dreams are exactly like real life, and whilst we are in them we believe that we are 'living the dream'. In fact, which exactly is real life our awakened state, or our dream state?

The Chambers Dictionary does in fact give the game away, since it traces the word back to the Latin -

The translation of the Latin word is - 'to wander in mind'; this is a far distant meaning to this being an 'error' or 'something that is not really there'. 'To wander in mind' refers simply to a state of 'day-dreaming'. In fact the Skeat Etymological English Dictionary (1894) has this meaning - hallucination - 'wandering of mind'. It goes on to give the same Latin words -
The meanings given are - to wander in mind, dream, rave, with hallucinatio meaning 'wandering of the mind'. Skeat's dictionary is the closest to being right here, since it translates the term directly from the Latin meaning. A hallucination is simply a 'day-dream', and one as real as any of our dreams; but it is a day-dream which is actually seen as a 'vision'. This is why the meaning has been distorted, since to do so takes a different state of consciousness.
There is a single point here that seems to be of great importance, that the Latin spellings can be either ALU or HALU. In Esoteric Work we have seen the importance of the 3-4 Formula, since this occurs in our own 33 Rune-Row, where the Three AEttir are now Four AEttir.

ALU is linked to our word 'ale' which is an intoxicating drink, a drink which can alter one's state of mind. In the Ar-Kan Three Cauldrons Exercise the Head-Centre is represented by the Ansuz (AESC) Rune and is linked to Odhroerir. The word Od-hroerir stems from Od (Spirit) and hraerir (Excited, Stirred, Intoxicated). This, in our terms is the Wod-Roarer, the 'Exciter of the Wod', and is thus linked to Woden who is the 'Master of Wod'. The Heart-Centre is represented by the Lagu-Rune (Son) and the Hara-Centre by the Ur-Rune (Bodn). These three Sacred Centres are on the three stages of human consciousness - UR = Gut (Intuition), LAGU = Heart (Emotions) and ANSUZ = Head (Intellect).
Where does the 'H' come into this? Well, we do not have a centre of consciousness that is above the head, i.e. beyond and outside the human brain, heart, gut, and thus the Higher State of Consciousness. In meditation today, whilst doing my daily exercise-bike work-out, it came to me that this may well be symbolised by the HAEGL Rune.

The Base-Rune is UR, and the HAEGL-Rune is an Ur-Rune with an upturned Ur-Rune above it - Ur and its reflection. This seems to be symbolic of the 'reflection' of anything here in Middle-Earth in the Other-World. This can also be seen if we use the HAGAL-Rune -

Here, rather than the Ur-Rune and its reflection we have the Eohls-Rune and its reflection in the Calc-Rune. That the Fourth Centre would be symbolised by the Haegl-Rune - rune of wholeness, health and oneness - is thus fitting I feel, since it goes beyond the conflict of opposites, merging the two into a wholeness. Thus, rather than the ALU-Formula we have the HALU-Formula. But...I do not feel that this should be used in the ALU-ULA Exercise, since this is the communication between the Base Centre and the Third Eye, and the two-way exchange through the 'Messenger of the Gods' (the Fiery Serpent) between Man and the Gods. At this stage it seems wise to leave this until more research is done on the subject, but HALU does seem - to me anyway - to be a valid extension of the ALU Formula, as may ULAH which naturally follows.
I am inclined to agree with Tom Rowsell (Survive the Jive) in that the 'ALU-GOD' with his symbolism of the Swastika is in fact Woden. Woden's Folk has used the term 'ALU-FATHER' as well as 'ALL-FATHER' and even incorporated the Babylonian name ILU which means 'Light' or 'God'. There is a Semitic term EL for 'God', but even here we have merely a difference of sound/spelling, and we have our own ELF meaning 'Shining' or 'Light', so it cannot be ruled out that this was an Aryan Root-Name. Tolkien has the name of the High God as ILU-VATER, rendered as 'The One', but which can also be 'ILU-FATHER'; since the alternative is ERU, meaning 'The One' then ILU/IRU/ELU/ERU are variations, just as we have IR-MIN or ER-MIN, or even AR-MIN. 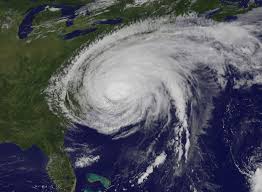 A hurricane, seen from a satellite image, is a swirling spiral, or a swirling swastika in two-dimensional form. As the 'Storm-God' this fits Woden well; we do not know where the term Fylfot came from, but as I have shown before through the Merseburg Charm this is the 'Foal's Foot', and is thus also symbolic of Baeldaeg in the Nether-World. The Fylfot-Swastika is the Black Sun, whose alternative glyph is made up of Four Swastikas - 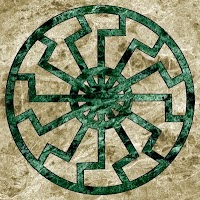 I have mentioned this because Woden is the 'Exciter of Ecstasy' - of the Woda-Force. Odhroerir is both the vessel (i.e. the Centre) and the force itself (the energy from the Head-Centre). 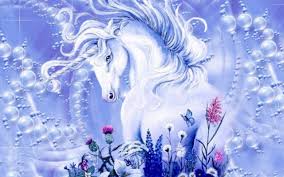 Although we use the SWAN as the symbol of the Head-Centre (Third Eye), since this is the Third Eye Centre it may also be fitting to use the UNICORN. The 'Unicorn' ('One-Horn') has a spiral horn at the Third Eye Centre, and has always been associated with the Moon. That this represents as force or energy is certain through the symbolism of the 'Horse'. This is a White Horse with the Third Eye opened - awakened. The White Swan would be the Solar Symbol, whereas the White Unicorn would be the Lunar Symbol. This, of course, suggests another type of meditation-visualisation in which the Left & Right Brains are brought into play together. Left-Brain - SWAN & Right-Brain - UNICORN.
The Spiral Symbol used of this Third-Eye Chakra would suggest that the use of the SWASTIKA for the Chakras - as is done by Miguel Serrano - is correct. The SWASTIKA is a SPIRAL in a two-dimensional form. This would be an S-Swastika or Thulean-Swastika as used by Miguel Serrano in his illustrations of the Armanen Runes.

The original Irminsul seems to have had Swan's Wings on top of the Irmin-Column; the symbolism is the same as Iggdrasil in Norse Myth. Below the Swan's Wings are the Ram's Horns, which may well be symbolic of the Ammon-Horn which is found near the Pineal Gland in the head. This points towards the North Star - the Nail of the Northern Sky - which represents the High Seat of the High God. The symbolism of the Serpent (Earth-Bound Man) that transforms into the Eagle/Swan/Winged Serpent (Divine Man - The Man-God) is found in the Symbol of Iggdrasil - the 'Sun-Dragon of Ing'. The God of the Arya -
The symbolism of the Saxon Irminsul is here shown with three parts - Base-Centre-Head. Iggdrasil has the Serpent (Base) and the Eagle (Head) with the Hawk at the Third Eye (Hawk-Eye). The 'column' of both the Irminsul and Iggdrasil is in microcosm the human spine, made up of 33 parts each one of which is represented by one of the 33 Runes. Of interest here is that the 9 extra runes make up the Sacrum (5) and the Coccyx (4), the last 4 being the Four Hallows, again being part of the 3-4 Formula (Graal-Hallows). 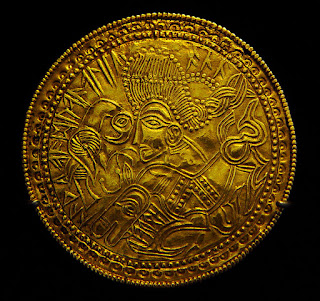 This figure seems to show Woden riding a stylised horse, and the ALU-Formula may be hidden in the runes etched in different parts of the bracteate - from Denmark. The head of Woden shows his left eye, in front of which is another 'eye', which in itself suggests this is in fact Woden. Similar bracteates show the Swastika, and one with ALU-GOD has the Swastika on it too.
Ilu (Babylon) and Iluvater (Tolkien) are not 'racial gods', they are the High God or Creator-God, which is akin to our All-Father or Wr.Alda (Primal Ancient One). It may be the ALU also refers to the High God or Creator God - the 'Primal Ancient One'. It is interesting to note that the M42 Nebula in Orion the Hunter (Herne the Hunter or Woden Herian) is the 'Eye of Orion' - 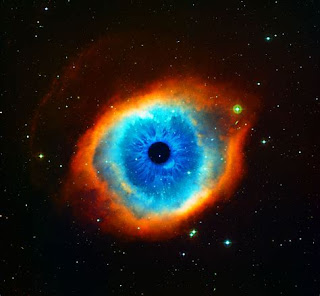 The Myth of Orion, as mentioned in the book Hamlet's Mill has many similarities to that of the Myth of Robin Hood ('The Hooded Man'). Somewhere here there is a link to Woden as Herne the Hunter (Bow-God), and Orion was linked to the Egyptian God Osirus (As-Ar). The name 'Orion' may well be seen as Ur-Aion or 'The Primal Aeon'. In Germanic Lore, when the Sword of Orion turns red this means the 'End of the World-Age'. At the foot of Orion is the Dog-Star - Sirius, and 'The Fool' of the Tarot could represent Orion & Sirius.
I have strayed somewhat from the original theme - as usual - but my mind 'wanders' as the post progresses, so I like to write down what comes into my head, since these things may one day fit together into a pattern that I have not seen as yet. Here in England the Constellation of Orion is set out in the chalk hills of Dorset as the 'Cerne Abbas Giant' - the winter aspect of Woden as the Wild Hunter-God. The notable feature of this hill-figure is the Solar-Phallic Symbolism, which immediately gives (to most) the idea of 'fertility', but in spiritual terms this denotes a 'Creator-God'. 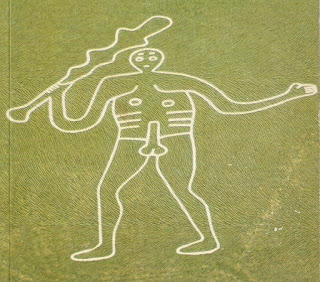 I'll come back to the theme of H-ALU when more meditation-visualisation has been done on this, since we cannot use it until being a bit more sure that it is a workable formula. This will no doubt not be verifiable in historic terms, but our Ancient Runes did not stagnate and stay as they were in ancient times - they evolve as we evolve.
Posted by Wulfinga at 11:24